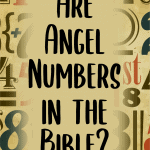 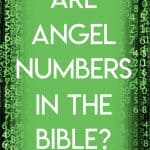 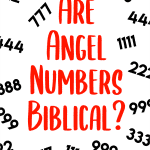 In this post We will take a deep look into angel numbers and answer the question are angel numbers in the Bible and should Christians pursue them. So, let dive in deep and find out…

For probably the past 6 months I have been confronted with the topic of angels numbers. It first started when I was writing on the Biblical topic of angels (More on Angels Here) and then it started coming up randomly in different places. People saying stuff, seeing it online on Christian sites and so on. Here are my two recent examples that happened to me in person.

No joke this happened at the grocery store a few months back. I was going through the cash register and the lady said my total was $111.11. She said, “ohh, isn’t that neat!”

Before I could even respond the guy behind me goes off about angel numbers. “That means you have an angel… Those are angel numbers. You must be special. I’m going to really think about this one when I get home.”

Then fast forward to yesterday. My sister-in-law is over and mentions how she has been waking up 2:22. And how a friend told it’s an angel trying to talk to her and it’s an “angel number.”

And that was it. I had reached my limit of hearing about angel numbers. I can’t handle that so many people are being deceived by this occultic practice is somehow tied to us hearing from God or His angels. So, I am going to break it down for my fellow Christian… “What are angel numbers?” And “Are they Biblical?” Let’s do this!

What are Angel Numbers?

Angel numbers is the thought that angels or the angelic are trying to communicate to you through numbers or numerology. Usually, this happens when we see a sequence of numbers like 222, 444, 1111, 777 ect…

This is NOT to be confused with Biblical numerology. I have a post on that which you can read here: Insight into the Biblical Meaning of Numbers.

What Do Angel Numbers Mean?

It is said that these numbers have different meanings that convey a message. Basically they can mean whatever you want… at least that is what I have gathered from websites on the matter.

Here is a snippet from a site:

“Angel number 1111 could be a message about someone in the afterlife. Let me explain: To determine who this message is about depends on when and where you saw angel number 1111. Think back to the last time you noticed this number. What were you doing just before or immediately after seeing 11:11? These clues will help you identify who is sending you a message from heaven. Once you’ve got it cracked, there could be another meaning of seeing 1111.”

Uhhhh ok? So, basically you can make these numbers up to whatever you feel like or think works out.

Ok, so now you have the gist of what angel numbers are. Let’s go back a little and see where their origin comes from.

If you have been reading through you probably know the answer is not the Bible.

It’s been actually very hard for me to find the origin or who invented angel numbers.  So, I am sorry that I can’t give you an in-depth history of them,

But I can give you these two things which I believe says a LOT about angel numbers and where they stem from.

The first thing is when you research angel numbers you get a slew of different occult and sadly some faith-based sites as results. But the most common are sites with URLs or names with the words: tarot cards, goddess, magic, psychics…. and numerology.

And that’s where I personally believe the origin of angel numbers comes from: Numerology

In a nutshell numerology is the belief in divine, spiritual, or mystical connection or relationship between a number of series or pattern of numbers. They can be connected to an event or not. This has been linked with astrology, the paranormal, divination, and pseudo-science.

No, angel numbers are not in the Bible. We never see God’s angels speaking to individuals in numbers or sequences of numbers. When angels came to bring a message from the Lord they either spoke or ministered by vision/dream. You can read more about how angels communicate in Understanding the Work of God’s Angels.

And angels never draw attention to themselves. A true angel will always bring your attention to God. Any other spirit that doesn’t, belongs to the devil. (1 John 4:1-3) We don’t pray to angels or seek them out. We pray and seek God!

Angel numbers are a form of divination and should be treated as something that God detests. And if we practice or indulge in it…it is a sin.

The word divination comes from the Latin divinare, meaning “to foresee” or “to be inspired by a god.”

To practice divination is to uncover hidden knowledge by supernatural means. It is associated with the occult and involves fortune-telling or soothsaying, as it used to be called. (Source)

I want to end with some scripture on what God thinks of these kinds of practices and how as Christian we should steer FAR AWAY from them.

If we don’t we open up ourselves to demons to be tempted, harassed, and deceived. Remember what 1 Peter 5:8 says… “Be alert and of sober mind. Your enemy the devil prowls around like a roaring lion looking for someone to devour.”

We must be wise and careful. If you have indulged in angel numbers or any other form of divination. Then repent, ask God to forgive you and to cleanse you. Renounce any relationship and connection with the occult.

Deuteronomy 18:9-12 NKJV – 9 “When you come into the land which the LORD your God is giving you, you shall not learn to follow the abominations of those nations. 10 “There shall not be found among you [anyone] who makes his son or his daughter pass through the fire, [or one] who practices witchcraft, [or] a soothsayer, or one who interprets omens, or a sorcerer, 11 “or one who conjures spells, or a medium, or a spiritist, or one who calls up the dead. 12 “For all who do these things [are] an abomination to the LORD, and because of these abominations the LORD your God drives them out from before you.

Galatians 5:19-21 NKJV – 19 Now the works of the flesh are evident, which are: adultery, fornication, uncleanness, lewdness, 20 idolatry, sorcery, hatred, contentions, jealousies, outbursts of wrath, selfish ambitions, dissensions, heresies, 21 envy, murders, drunkenness, revelries, and the like; of which I tell you beforehand, just as I also told [you] in time past, that those who practice such things will not inherit the kingdom of God.

Revelation 21:8 NKJV – 8 “But the cowardly, unbelieving, abominable, murderers, sexually immoral, sorcerers, idolaters, and all liars shall have their part in the lake which burns with fire and brimstone, which is the second death.”

I hope this article on angel numbers has brought you clarity and the answers you have been seeking. Please leave me a comment below as I always love to hear from my readers.