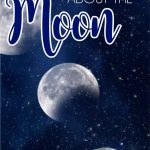 A collection of Bible verses about the moon. All these scriptures on the moon will be from the NKJV and can be used for studying the topic of the moon in the Bible.

I have written on the sun, stars, and rainbows. And now it’s time to talk about the lesser light…the moon!

From Genesis to Revelation we see that moon is mentioned 62 times in the King James Bible. That’s a lot of information about the moon. And It’s pretty interesting once you start to dig in. We will look at 33 Bible verses on the moon. This will give us a really good scope.

To make navigating through the verses easier. Here is a handy dandy table of content. You can hop around the post by clicking on the subject you want to read on or you can just scroll through like usual.

The Moon In The Bible

Before we get started here is interesting information about the moon in the Bible. The moon plays a big part in scripture when it comes to the New Moon festivals of Isreal and even their calendar. The Hebrew calendar is a lunisolar calendar. This means that their months are based on the moon’s phases but their years are based on the sun. Most of the world follows the Gregorian calendar which is only a solar calendar.

Here is what Smith’s Bible Dictionary says about the moon in the Bible:

Moon, The moon held an important place in the kingdom of nature, as known to the Hebrews. Conjointly with the sun, it was appointed “for signs and for seasons, and for days and years;” though in this respect it exercised a more important influence, if by the “seasons” we understand the great religious festivals of the Jews, as is particularly stated in Psalms 104:19 and more at length in Ecclus 43:6, 7. The worship of the moon prevailed extensively among the nations of the East, and under a variety of aspects. It was one of the only two deities which commanded the reverence of all the Egyptians. The worship of the heavenly bodies is referred to in Job 31:26, 27 and Moses directly warns the Jews against it. (4:19) In the figurative language of Scripture, the moon is frequently noticed as presaging events of the greatest importance through the temporary or permanent withdrawal of its light. (Isaiah 13:10; Joel 2:31; Matthew 24:29; Mark 13:24)

Bible Verses on The Moon

All verses below are from the NKJV. You can hover over the reference and you can check out the Amplified translation of the Bible verse. If you would like to check out other translations then head over to Bible Gateway.

Psalm 8:3-4 NKJV – 3 When I consider Your heavens, the work of Your fingers, The moon and the stars, which You have ordained, 4 What is man that You are mindful of him, And the son of man that You visit him?

The verses below are about the moon turning to color red or blood. These verses are understood as end-times prophecy and studied in eschatology.

Joel 2:31 NKJV – 31 The sun shall be turned into darkness, And the moon into blood, Before the coming of the great and awesome day of the LORD.

Revelation 6:12 NKJV – 12 I looked when He opened the sixth seal, and behold, there was a great earthquake; and the sun became black as sackcloth of hair, and the moon became like blood.

Acts 2:20 NKJV – 20 The sun shall be turned into darkness, And the moon into blood, Before the coming of the great and awesome day of the LORD.

Darkening of the Moon Verses

These verses are very similar to the ones above dealing with end-times. These Bible verses talk about the moon going dark.

Mark 13:24 NKJV – 24 “But in those days, after that tribulation, the sun will be darkened, and the moon will not give its light;

Joel 3:15 NKJV – 15 The sun and moon will grow dark, And the stars will diminish their brightness.

Isaiah 24:23 NKJV – 23 Then the moon will be disgraced And the sun ashamed; For the LORD of hosts will reign On Mount Zion and in Jerusalem And before His elders, gloriously.

Isaiah 13:10 NKJV – 10 For the stars of heaven and their constellations Will not give their light; The sun will be darkened in its going forth, And the moon will not cause its light to shine.

Moon Worship In The Bible

Celestial worship, that of the sun, moon, and stars was a common religion in ancient times. God detested it as He was the creator of all things in the heaven. He is very clear we are to worship Him alone.

Deuteronomy 4:19 NKJV – 19 “And [take heed], lest you lift your eyes to heaven, and [when] you see the sun, the moon, and the stars, all the host of heaven, you feel driven to worship them and serve them, which the LORD your God has given to all the peoples under the whole heaven as a heritage.

Deuteronomy 17:3 NKJV – 3 “who has gone and served other gods and worshiped them, either the sun or moon or any of the host of heaven, which I have not commanded,

2 Kings 23:5 NKJV – 5 Then he removed the idolatrous priests whom the kings of Judah had ordained to burn incense on the high places in the cities of Judah and in the places all around Jerusalem, and those who burned incense to Baal, to the sun, to the moon, to the constellations, and to all the host of heaven.

Job 31:26-27 NKJV – 26 If I have observed the sun when it shines, Or the moon moving [in] brightness, 27 So that my heart has been secretly enticed, And my mouth has kissed my hand;

Jeremiah 7:18 NKJV – 18 “The children gather wood, the fathers kindle the fire, and the women knead dough, to make cakes for the queen of heaven; and [they] pour out drink offerings to other gods, that they may provoke Me to anger.

Psalm Verses About The Moon

Psalm 89:37 NKJV – 37 It shall be established forever like the moon, Even [like] the faithful witness in the sky.” Selah

Psalm 72:5 NKJV – 5 They shall fear You As long as the sun and moon endure, Throughout all generations.

Psalm 81:3 NKJV – 3 Blow the trumpet at the time of the New Moon, At the full moon, on our solemn feast day.

Psalm 81:1-5 NKJV – 1 To the Chief Musician. On an instrument of Gath. [A Psalm] of Asaph. Sing aloud to God our strength; Make a joyful shout to the God of Jacob. 2 Raise a song and strike the timbrel, The pleasant harp with the lute. 3 Blow the trumpet at the time of the New Moon, At the full moon, on our solemn feast day. 4 For this [is] a statute for Israel, A law of the God of Jacob. 5 This He established in Joseph [as] a testimony, When He went throughout the land of Egypt, [Where] I heard a language I did not understand.

Habakkuk 3:11 NKJV – 11 The sun and moon stood still in their habitation; At the light of Your arrows they went, At the shining of Your glittering spear.

Ecclesiastes 12:2 NKJV – 2 While the sun and the light, The moon and the stars, Are not darkened, And the clouds do not return after the rain;

Song of Songs 6:10 NKJV – 10 Who is she who looks forth as the morning, Fair as the moon, Clear as the sun, Awesome as [an army] with banners?

Jeremiah 31:35 NKJV – 35 Thus says the LORD, Who gives the sun for a light by day, The ordinances of the moon and the stars for a light by night, Who disturbs the sea, And its waves roar (The LORD of hosts [is] His name):

Genesis 37:9 NKJV – 9 Then he dreamed still another dream and told it to his brothers, and said, “Look, I have dreamed another dream. And this time, the sun, the moon, and the eleven stars bowed down to me.”

Joshua 10:12 NKJV – 12 Then Joshua spoke to the LORD in the day when the LORD delivered up the Amorites before the children of Israel, and he said in the sight of Israel: “Sun, stand still over Gibeon; And Moon, in the Valley of Aijalon.”

Quick Reference List of 33 Bible Verses about the Moon

Like I do with all my topical Bible verses here is a simple reference list of Bible verses about the moon. I hope this makes it easy for you to jot down these verses in your journal or Bible for future use or study.

I hope these Bible verses on the moon have blessed you and stirred up your hunger to dive deeper into God’s word! If you would like to read more on the topic of celestial elements in the Bible then check out some of these posts!

Feel free to drop me a comment below! I would love what God is doing in your life!

I'm on Gab.com, my user is georgenotwell02, Could you send me a post on the blood moons, your website etc. I'm also interested in the Star of Bethlehem and have posted the Cross with an X in the middle. This is the first time we have been able to photograph it. To me it's the real Pontifex Maximus.

Hi, I am sorry but I am not on Gab. You are more than welcome to share this post by copying the url and sharing it on Gab. Blessings to you!