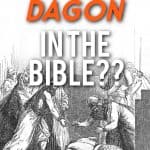 An overview of the false god, Dagon in the Bible.

If you have been around Think About Such Things you might be scratching your head a little on why I would want to write about Dagon. I mean why write on a false god in the Bible?

To be honest this isn’t a topic I enjoy especially compared to others like angels, or symbolism. But as I have grown as a Christian and study His word. I realize I miss a lot of things because I don’t understand or know certain stuff.

Learning about the gods and people that the Israelites dealt with really helps us understand the stories we read in the Bible.

For example, Baal was known as the god that controlled weather like rain, and sun. This makes the story of Elijah challenging the prophets of Baal come alive! When Elijah prayed for rain and it came it was showing the Yahweh was the one true God, not Baal. (1 Kings 18-19) Our God is awesome!

So, you can see that there is a benefit of knowing who these false deities and idols were. With that said…let’s dive in.

Dagon in the Bible: The Fish God

Dagon was often depicted as having the torso of a man and a tail of a fish. Yup, a merman. Here are a couple of pictures

He was chiefly known as a god of fertility and reproductive power. Fish can multiply at quick rates. For example, the gray grouper can produce 340 million eggs in one season. That’s insane!

What Does Dagon Mean?

Many historians have said that the Hebrew dialect of that time shows that the root word for dag means fish and the whole word Dagon or Dagon was a term of endearment… “little fish.”

Not to be confused with being little as small or insignificant but like “my dear little fish.” A term of affection.

But other experts in ancient language believe the name is related to the word, grain.

When looking at the Strongs Concordance you get the basic idea of a fish.

In scripture, we see that each time that Dagon is mentioned he is worshiped by the Philistine people. Dagon was considered their chief god.

The Philistines lived on the south coast of Canaan. Being a coastal people the sea was very important to them and relied on it as a source of food.

But interesting enough you see the god Baal more than Dagon. In Canaanite texts, Baal is sometimes mentioned as “The son of Dagon.” So, there is some relationship between the two.

Dagon was known to be worshiped even up to the time of Christ. And we even see reference a Dagon temple in the aprochyla book of 1 Maccabees.

Many Historians believe Dagon was the first mention of a mermaid type figure in antiquity. And many other nationalities took on similar idols and many of them encompass the idea of fertility.

It is also said that Dagon is connected with the zodiac sign Pisces. These other pagan deities are not mentioned in scripture.

The ancient Babylonians believed that Oannes came out of the Erythrean Sea (the Red Sea) and came to teach them wisdom.

There are only two accounts of in scripture that mention Dagon. And both of them are pretty epic. I love how God shows off His power and majesty in both accounts!

The first time we hear of Dagon is in the story of Samson. When Samson is captured it says the Philistines worshiped and praised Dagon…

Now the lords of the Philistines gathered together to offer a great sacrifice to Dagon their god, and to rejoice. And they said:

“Our god has delivered into our hands
Samson our enemy!” – Judges 16:23

But later in the chapter we see that they call for Samson to mock and gloat over their victory. But Samson cried out to the Lord and the Lord answered his prayer. God had the last laugh and showed the Philistines that Dagon was no match for Him!

I also find it interesting that Samson’s weakness with women especially philistine women. And the god they are worshiping is a fertility god. I would not be surprised if these women were influenced by this evil and perverted spirit to tempt Samson.

The Second Account: The Ark of the Covenant and Dagon

I personally love this story so much. In chapter 5 of 1 Samuel you read the account of when the philistines captured the Ark of the Covenant and placed it next to Dagon in his temple.

The next morning Dagon’s statue had toppled over. The Philistines put it back up and the following day it fell over again breaking off its head and arms.

Then to top it off the Philistines were stricken with tumors. In the King James Version and the Septuagint, it states that these tumors were on their private parts…ouch!

And it was so, that, after they had carried it about, the hand of the Lord was against the city with a very great destruction: and he smote the men of the city, both small and great, and they had emerods in their secret parts. – 1 Samuel 5:9 KJV

Dagon being a “fertility” god could not protect his people and God once again showed He was master over that as well!

Here are some quick key points about Dagon in the Bible.

Dagon is a false god and idol. On a spiritual level, Dagon is a demonic/evil spirit.

Well, I hope you have enjoyed this Bible study on Dagon and that you learned something. But most of all I hope it stirred your hunger to go after God more! Also, feel free to leave me a comment below. I would love to hear from you.

There is also a mention of Dagon in 1st Chronicles 10:10

I am realy enriched spiritually by studying your article on Dagon. God bless you and reveal more truth about His words for His glory..

Hmm, I wonder if the tumors on secret parts is the same as monkeypox

Thank you for this biblical story of Dagon. Gods bless you.

This is great. Thank you dor sharing. 🧡 God bless.