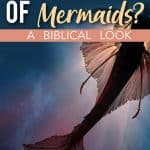 Dreaming of mermaids? In this article we will take a Biblical look at the spiritual and symbolic meaning behind mermaids in dreams. So, let’s get started…

I recently finished up an article called Are Mermaids in the Bible? And I highly recommend you check it out if you really want a full grasp on this topic.

But in this post, we are going to just target some key points that I hope help bring clarity and insight to what you are dreaming.

If you have been around my site Think About Such Things you will know that I write a lot about dreams. As a Christian, I think it’s vital that we understand Biblical symbolism and imagery. This helps us tremendously to discern when we have dreams and visions.

For More Articles on Dreams:

We have to lay a little foundation on the Biblical and Spiritual meaning of mermaids first.

When it comes to mermaids it’s easy to get caught up into our cultural imagery of what these creatures look, act, and symbolize. I think all of us have seen the Little Mermaid or Splash and have read fairy tales and books on mermaids. These artistic outlets have engrained into our minds what merpeople are like.

But for us to fully understand their spiritual meaning we need to look back into history and also, see what the Bible has to say about the topic.

When I first did my study on Are Mermaids In the Bible? I was pretty firm that there are NO mermaids in the Bible. But as I began to dig deeper I was shocked. There actually is and it’s something that repeated itself in ancient beliefs.

In the story of Samson in the Bible, you see the mention of a Philistine god named Dagon. This false deity is also mentioned in 1 Samuel.

The interesting fact is that Dagon is depicted as a merman! He was known as the fertility god since fish reproduced quickly.

The Babylonians had a similar diety called Oannes and the Greeks Triton. In 2 Maccabee (some Christians view 2 Maccabees as part of the Biblical Apocrypha and some don’t) the Syrian goddess Atargatis is also mentioned. She apparently was human but killed her lover and jumped into a lake and became a mermaid. She much like Dagon was considered a fertility god.

I would not be surprised If it wasn’t the same evil spirit in operation but under different names.

So right there you know that mermaids are not just some mythical creature that people made up, because they thought it would be cool.

This is deeply rooted in antiquity and is very much a spiritual thing. As people of faith, we need to search these things out and not just rely on what culture tells us.

Throughout antiquity and more modern history mermaids have been known to be creatures of seduction.

Here are even some modern day views mermaids seduction:

This should not be surprising at all. Even if we don’t look into the Greek and just look at Dagon and Atargatis they are known as deities of fertility (More on Dagon Here).

So, if you are looking for a black and white Biblical and spiritual meaning on mermaids they fall under promiscuity, seduction, and sexual immorality. And many folklore stories have these creatures leading their victims to death. The wages of sin is death (Romans 6:23).

In light of all this information. We need to be wise on how we interpret and understand dreams about mermaids.

How to Interpret Mermaids in Dreams

Before we start some key things to remember when interpreting any dream.

Then Joseph said to them, “Do not interpretations belong to God? Tell me your dreams.” – Genesis 40:8

Since mermaids do have an evil connotation. We need to keep that in mind when understand what they could mean in a dream. I can’t guarantee you that 100% every time a mermaid has a negative meaning.

God can take a symbol and use it any way He likes, but the majority of the time the symbol stays true. This is also true for snake dreams.

Here are some important steps to take to help you interpret your mermaid dream:

My Dream of a Mermaid

I thought I would share a dream I had many years ago that involved a mermaid. I hope it helps.

A relationship I had ended with a guy I cared deeply about. He made some large life choices that for me were not logical but he felt like he had to follow his heart no matter what the cost to himself, family, ministry…etc. Months later I had this dream…

Mermaid Dream: I was in the huge room and it was kind of dark and hazy. There was a gigantic water tank nearby. I went towards the tank to look in. It was just water. All of a sudden a mermaid appeared in the tank. It swam towards me and began to laugh at me. She then said to me, “he’s mine, you can’t have him…” She kept repeating it and laughing/mocking me at her victory over me. That was the end of the dream.

I prayed and the Lord showed me that I had tried so hard to reason with him, but I was not dealing with human logic. It was a spirit that was seducing him to make drastic life decisions based on his desires.

I couldn’t understand what was happening or going through his mind. But the dream brought a lot of clarity to me. I prayed for him, ask God to open his eyes, and bless him. I never did tell him the dream or bring it up. As he moved our friendship slowly ceased.

Praying Over Your Dream

Therefore submit to God. Resist the devil and he will flee from you. – James 4:7

Sometimes you will have a sense of what your dream means right when you wake up or in the morning. I would still write down the dream and pray.

I do want to share some pray points you can take if you do feel like the mermaid symbolizes a spirit of seduction or sexual perversion.

You are dealing with sexual issues:

You feel targeted by a seducing spirit:

You feel like the dream is about someone else:

I hope this article helps you better understand what it means biblically when you are dreaming about mermaids.

Dreams are a mysterious thing, but God does use them (Acts 2:17). Keep writing them down and praying. If the Lord wants to speak to you about it. He will!