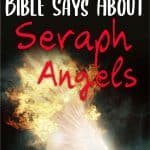 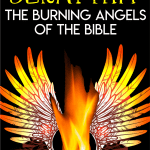 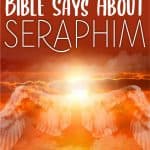 In this article we be going into a quick Bible study on Seraphim in the Bible. We will take a look at the definition, and verses about seraph angels. So, grab you Bible and get ready to learn about these burning angels…

To go along with my Study on Cherubim, I thought it would be good to write on Seraphim. You can check out all my posts about angels on my Angelology page if you would like.

But for now, we are going to take a deep look into what are seraph angels. And hopefully, answer some very important questions that will help us understand these angelic creatures.

What does the Word Seraphim or Seraph Mean in Hebrew?

Before we get into the meaning I want to make sure you understand that Seraphim is the plural form of seraph. There is no difference between the two except that.

The meaning or definition of Seraphim is “burning.” We see that they are called this because of their description.

Many scholars believe that the cherubim mentioned in Ezekiel 1 and 10 are actually the seraphim of Isaiah 6. This is very plausible since the description of these angels is extremely similar. This would make the word “cherubim” more a general term for a group of different species of angels.

Where can I find Seraphim in the Bible?

The actual word “seraphim” is only found in one chapter of the whole Bible. The word seraph is not even found. It’s interesting to note that cherubim are mentioned over 100 times.

The key scripture portion for us to learn about seraphim is from Isaiah 6 NKJV. In this chapter, you will see that the prophet Isaiah has an incredible encounter where he is in the throne room of God. And it is here we see these angels ministering unto the Lord.

Since this is just one chapter and only 13 verses. I have placed it below for you to read.

“Holy, holy, holy is the Lord of hosts; The whole earth is full of His glory!”

4 And the posts of the door were shaken by the voice of him who cried out, and the house was filled with smoke. 5 So I said: “Woe is me, for I am undone! Because I am a man of unclean lips, And I dwell in the midst of a people of unclean lips; For my eyes have seen the King, The Lord of hosts.”

6 Then one of the seraphim flew to me, having in his hand a live coal which he had taken with the tongs from the altar. 7 And he touched my mouth with it, and said:

“Behold, this has touched your lips; Your iniquity is taken away, And your sin purged.” 8 Also I heard the voice of the Lord, saying: “Whom shall I send, And who will go for Us?” Then I said, “Here am I! Send me.”

And He answered: “Until the cities are laid waste and without inhabitant, The houses are without a man, The land is utterly desolate, 12 The Lord has removed men far away, And the forsaken places are many in the midst of the land. 13 But yet a tenth will be in it, And will return and be for consuming,As a terebinth tree or as an oak, Whose stump remains when it is cut down. So the holy seed shall be its stump.”

Seraphim In Other Bible Verses?

Like I mentioned above some scholars believe that the seraphim in Isaiah are the cherubim in Ezekiel and the living creatures of the Book of Revelation.

You are basically getting 3 different men’s description on angelic creatures that they have zero earthly grid for. Something that stuck out to Ezekiel may have not to John.

It’s like putting a German shepherd in front of 3 people who have never seen a dog before and asking them separately to describe the dog. You will have similarities, but each person will emphasize different things they noticed or felt were important.

So, it’s plausible that these seraphim are the same angels, but then again they could be different. God doesn’t lack in his celestial hosts. He created 1000’s upon 1000’s of angels.

If you would like to compare the different portions of scripture with Isaiah 6 here is the list. You can click them and read the chapters or verses.

For this portion, I will stick with just Isaiah’s description of these angels. And since the chapter can be read above I will place bullet points here of what they look like.

It’s important to remember they are called “Seraphim = burning” These angels were burning perhaps on fire since they are near the altar of God. And they were able to pick up a live (burning) coal with their bare hands. (V6)

Isaiah doesn’t mention multiple faces but they could have been covered by their wings and were never revealed. He also doesn’t mention them being covered in eyes like John or Ezekiel.

Images of Seraphim or Seraph Angels

Here are some images I found that describe seraph angels. Some are close to what Isaiah describes and some tried their best at attempting to create these creatures.

All in all, I thought it would be helpful and fun was to kind of get an idea of what they could look like. All photo sources and or artists can be found underneath the picture.

I’m sure we are way off, but someday we will see what they truly look like.

A Summary of Key Points

I thought it might be helpful to recap some key points in this article. You can use this as a quick review, or if you don’t feel like reading the whole thing take this as a little cheat sheet.

I hope this article has answered some of your questions about seraphim and that it has stirred you up to get into the Word of God more. Please feel free to leave me a comment below. I would love to hear from you and know what God is doing in your life.

Living creatures,ceraphs,seraps r all same.They r not angels.İf ceraps and seraps werent the same in Rev there r ceraphs,24 elders and million angels before the Throne,ıt would say ceraps ,seraps,24 elders and angels

hi Melissa Nice to hear that you are running ministry and was new beginner in Christian was the chosen one from God and to know more our Lord Jesus Christ. My life is ups and downs big turnover found God's love and our Lord Jesus is very loving.