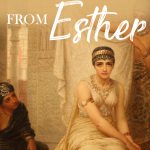 In this article we will discover some BIG lessons from Esther in the Bible. These truths will help you grow in your faith. So, grab your Bible and let’s dig in…

“This post was written by my good friend Braden Dreshbach. We met when I was living in beautiful San Diego. She is a powerhouse intercessor and is passionate about pursuing Christ. I hope this post blesses you as much as she has blessed me.” ~ Melissa

Many people are familiar with the story of Esther. The book of Esther is such a beautiful display of God’s faithfulness. Not only does it show His promising character, but it shows His outstanding ability to be strategic.

A brief overview of the Story of Esther: The king of Persia was looking for someone to become the new queen. He had banished the previous queen for disobeying him prior to this.

Many eligible women were gathered and prepared over the span of a year in hopes that they would become the next queen of Persia. Esther was among these women. When Esther was young she lost both of her parents so her cousin Mordecai adopted her and treated her as his own daughter.

Esther was of Jewish background and kept this a secret because Mordecai told her to. She was greatly favored by the king and ended up being chosen to become the queen of Persia.

Years went by and an edict went out that stated all the Jews would be attacked and destroyed on a certain day of the year. Esther was aware that she needed to confront the king and request that he would not do this to her people.

Knowing that she could lose her life in the process of all of this, she did it anyway and succeeded! Esther was a brave woman and she is preached about very often.

This is a very brief overview of Esther. If you haven’t read the book of Esther I highly recommend it! It is a great read! Now, lets dig into some lessons from Esther!

*If you would like to read the whole book of Esther online. You can do that here: Book of Esther

It is very apparent throughout the book of Esther that she walked in supernatural favor. It says that she had favor with everyone she met. She was not only favored by God but also with man.

Without this favor, I don’t think she would have come close to being the Queen of Persia.

I personally believe that this favor was a gift from God and that we all have the ability to access it in our own lives.

When I pray for favor I usually only do it in certain situations, like a job interview, or before an important meeting. While I was reading the book of Esther the Lord was nudging me to begin to pray for more favor in my everyday life and not just on special occasions.

When I see the way it changed Esther’s everyday life, I wondered how it could change my own. I did a little research on that word “favor.” It turns out the meaning of “favor” in the Greek can also be translated as “grace.”

So when praying for favor in our lives, it is the same as praying and thanking the Lord for His grace. I encourage you to begin to thank the Lord for the favor He has given you and that He would continue to increase it!

Lesson 2: Loving our life, not unto death

I have read the book of Esther many times. This particular time reading it, something jumped out at me about Esther’s character. When Esther realizes Mordecai is mourning she is distraught, and understandably so. The king had issued for her people to be slaughtered.

But when Mordecai urges Esther to speak to the king about it, she responds in a very interesting way. Instead of going into “let’s do this” mode, she begins to take her own life into account in the matter.

If she were to enter the king’s court without being summoned she could have been killed right there. Sometimes we miss this part of the story.

Esther’s first thoughts were not how she could save the people, but for her own self-preservation. If I am being completely honest, I would have done the same thing.

She had to be reminded by Mordecai that her favor and position as queen was not for her own gain.

In fact, Mordecai tells her that if she thinks she will escape the slaughter of the Jews by keeping her background hidden, then she is deceived. (OUCH!)

I can’t imagine how much courage it must have taken her to walk into the king’s court, knowing her life could be ended right then and there.

Knowing that she went through that process of worry and fear is actually very comforting. It isn’t like she just marched in there and gave the king orders. She was a normal person just like me and you.

Lesson 3: Honoring, even when you don’t have to

I love how she really sought to honor Mordecai, even after becoming queen. Mordecai plays such a vital role in Esther’s life.

To be completely honest, I don’t know if the Jews would have stood a chance if Mordecai were not in the picture. He was an extremely wise man, and Esther was wise in listening to him.

However, Esther’s devotion to Mordecai went much deeper than just simple obedience. She loved Mordecai and cared for him deeply. It grieved her to see him grieve, even when she had lavish things surrounding her.

He was the one who loved her as his own daughter when she had no one. In my personal opinion, this is the most beautiful and powerful thing about Esther.

She wasn’t shallow or consumed by worldly things. If Esther lacked this portion of character then nothing would have changed for Mordecai or the Jewish people. This was really more of a reminder to not let the things of the world hinder me from doing what is right in God’s eyes.

I love what Braden, has shared on this book. To wrap up the 3 BIG lessons from Esther:

If you enjoyed this post from Braden, you can also read another guest post she has written titled: 3 KEYS TO CONQUER WORRY IN YOUR LIFE

Wanting to learn more Bible life lessons and what it means to Wait on The Lord? Check out my two posts below!

Esther’s life is a wonderful example of how God uses simple women do great things for His glory. Her obedience to Mordecai, a shadow of the Holy Spirit, helped her become the queen of the King, again a shadow of Jesus.

Thank so much for this writing. I could use a little more of being Esther.

Thank you and please ignore the misspelling as I’m using Siri.