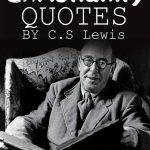 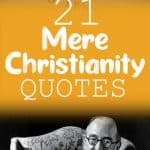 In this post we are going to Dive into some epic quotes from Mere Christianity by C.S Lewis. I hope each quote inspires you to draw closer to Jesus. Let’s get started…

I’m a huge C.S Lewis fan! I have read a large handful of his books… and can’t wait to read more! Today, I wanted to share with you some of BEST Mere Christianity quotes.

Now I don’t know what made you stumble upon my post. It could be that you are interested in reading this book or you have already read it and want a little refreshing.

Either way, these quotes do just that for you! But just in case you are new to C.S Lewis or his book Mere Christianity. Here is a little info on the book from goodreads!

“Mere Christianity is C.S. Lewis’s forceful and accessible doctrine of Christian belief. First heard as informal radio broadcasts and then published as three separate books – The Case for Christianity, Christian Behavior, and Beyond Personality – Mere Christianity brings together what Lewis saw as the fundamental truths of the religion. Rejecting the boundaries that divide Christianity’s many denominations, C.S. Lewis finds a common ground on which all those who have Christian faith can stand together, proving that “at the centre of each there is something, or a Someone, who against all divergences of belief, all differences of temperament, all memories of mutual persecution, speaks the same voice.” – check out reviews on goodreads

P.S don’t forget to check out these other C.S Lewis quotes

Alright, let’s get down to business!

“[Repentance] means unlearning all the self-conceit and self -will that we have been training ourselves into… It means killing part of yourself, under-going a kind of death.”  ― C.S. Lewis, Mere Christianity

“Nothing you have not given away will ever really be yours.”  ― C.S. Lewis, Mere Christianity

“If they are wrong they need your prayers all the more; and if they are your enemies, then you are under orders to pray for them. That is one of the rules common to the whole house.”  ― C.S. Lewis, Mere Christianity

“Imagine yourself as a living house. God comes in to rebuild that house. At first, perhaps, you can understand what He is doing. He is getting the drains right and stopping the leaks in the roof and so on; you knew that those jobs needed doing and so you are not surprised. But presently He starts knocking the house about in a way that hurts abominably and does not seem to make any sense. What on earth is He up to? The explanation is that He is building quite a different house from the one you thought of – throwing out a new wing here, putting on an extra floor there, running up towers, making courtyards. You thought you were being made into a decent little cottage: but He is building a palace. He intends to come and live in it Himself.” ― C.S. Lewis, Mere Christianity

“Even in literature and art, no man who bothers about originality will ever be original: whereas if you simply try to tell the truth (without caring twopence how often it has been told before) you will, nine times out of ten, become original without ever having noticed it.”  ― C.S. Lewis, Mere Christianity

“A proud man is always looking down on things and people; and, of course, as long as you are looking down, you cannot see something that is above you.” ― C.S. Lewis, Mere Christianity

“To have Faith in Christ means, of course, trying to do all that He says. There would be no sense in saying you trusted a person if you would not take his advice. Thus if you have really handed yourself over to Him, it must follow that you are trying to obey Him. But trying in a new way, a less worried way. Not doing these things in order to be saved, but because He has begun to save you already. Not hoping to get to Heaven as a reward for your actions, but inevitably wanting to act in a certain way because a first faint gleam of Heaven is already inside you.” ― C.S. Lewis, Mere Christianity

“Everyone thinks forgiveness is a lovely idea until he has something to forgive.”  ― C.S. Lewis, Mere Christianity

“My argument against God was that the universe seemed so cruel and unjust. But how had I got this idea of just and unjust? A man does not call a line crooked unless he has some idea of a straight line. What was I comparing this universe with when I called it unjust?” ― C.S. Lewis, Mere Christianity

“True humility is not thinking less of yourself; it is thinking of yourself less.”  ― C.S. Lewis, Mere Christianity

“This world is a great sculptor’s shop. We are the statues and there’s a rumor going around the shop that some of us are someday going to come to life.”  ― C.S. Lewis, Mere Christianity

“If I find in myself desires which nothing in this world can satisfy, the only logical explanation is that I was made for another world.” ― C.S. Lewis, Mere Christianity

“And out of that hopeless attempt has come nearly all that we call human history—money, poverty, ambition, war, prostitution, classes, empires, slavery—the long terrible story of man trying to find something other than God which will make him happy.” ― C.S. Lewis, Mere Christianity

“When you argue against Him you are arguing against the very power that makes you able to argue at all: it is like cutting off the branch you are sitting on.” ― C.S. Lewis, Mere Christianity

“It may be hard for an egg to turn into a bird: it would be a jolly sight harder for a bird to learn to fly while remaining an egg. We are like eggs at present. And you cannot go on indefinitely being just an ordinary, decent egg. We must be hatched or go bad.” ― C.S. Lewis, Mere Christianity

“The Christian says, ‘Creatures are not born with desires unless satisfaction for those desires exists. A baby feels hunger: well, there is such a thing as food. A duckling wants to swim: well, there is such a thing as water. Men feel sexual desire: well, there is such a thing as sex. If I find in myself a desire which no experience in this world can satisfy, the most probable explanation is that I was made for another world. If none of my earthly pleasures satisfy it, that does not prove that the universe is a fraud. Probably earthly pleasures were never meant to satisfy it, but only to arouse it, to suggest the real thing. If that is so, I must take care, on the one hand, never to despise, or to be unthankful for, these earthly blessings, and on the other, never to mistake them for the something else of which they are only a kind of copy, or echo, or mirage. I must keep alive in myself the desire for my true country, which I shall not find till after death; I must never let it get snowed under or turned aside; I must make it the main object of life to press on to that country and to help others to do the same.” ― C.S. Lewis, Mere Christianity

“For pride is spiritual cancer: it eats up the very possibility of love, or contentment, or even common sense.” ― C.S. Lewis, Mere Christianity

“Give me all of you!!! I don’t want so much of your time, so much of your talents and money, and so much of your work. I want YOU!!! ALL OF YOU!! I have not come to torment or frustrate the natural man or woman, but to KILL IT! No half measures will do. I don’t want to only prune a branch here and a branch there; rather I want the whole tree out! Hand it over to me, the whole outfit, all of your desires, all of your wants and wishes and dreams. Turn them ALL over to me, give yourself to me and I will make of you a new self—in my image. Give me yourself and in exchange I will give you Myself. My will, shall become your will. My heart, shall become your heart.” ― C.S. Lewis, Mere Christianity

“The terrible thing, the almost impossible thing, is to hand over your whole self–all your wishes and precautions–to Christ. But it is far easier than what we are all trying to do instead. For what we are trying to do is to remain what we call “ourselves,” to keep personal happiness as our great aim in life, and yet at the same time be “good.” ― C.S. Lewis, Mere Christianity

“Good and evil both increase at compound interest. That is why the little decisions you and I make every day are of such infinite importance. The smallest good act today is the capture of a strategic point from which, a few months later, you may be able to go on to victories you never dreamed of. An apparently trivial indulgence in lust or anger today is the loss of a ridge or railway line or bridgehead from which the enemy may launch an attack otherwise impossible.” ― C.S. Lewis, Mere Christianity

“The only things we can keep are the things we freely give to God. What we try to keep for ourselves is just what we are sure to lose.” ― C.S. Lewis, Mere Christianity

I hope you have enjoyed these quotes from Mere Christianity. Please drop me a comment below and share with me some of your favorite quotes!

So incredibly beautiful, I have desired to read C.S. Lewis but for whatever reason have yet to. Your post has re-ignited the curiosity and desire to learn from such a great man. Thank you.

I love and enjoyed the first three books of the chronicles of Narnia. I never saw the other ones. The quotes are brilliant christian ones. My friends would love that. Lay church group members. I will keep looking at the other sections of C's Lewis. Thanks for that.

Greetings Melissa from Delhi, India. This is Amy Parinita Mookerji. Love reading your insightful and well-researched, discursive articles. This is a very good selection of quotes from Mere Christianity :) Thank you.

Hello There! I really like your blog. You have shared amazing information about Christianity. All the quotes you have shared are very interesting and informative. Thank you so much for sharing it. Keep posting.

Thanks James! I am glad you enjoyed the quotes! C.S Lewis was a great man.