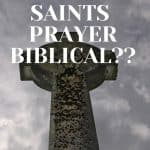 We will examine the Boondock Saints prayer and discover it’s meaning and more importantly answer if it’s biblical.

It’s amazing how a movie or tv show can inspire our faith and outlook on God. But when that happens we need to make sure that this source is based on Biblical truth or is it just some nice words someone wrote in a movie script.

So today I wanted to look at one of the popular movies in 1999, The Boondocks Saints. Technically, this movie didn’t do well in the theaters, but it somehow developed a huge following. Leading it to gross $50 Million in video sales.

In a very short nutshell, this American vigilante movie is about two Irish twin brothers (Connor and Murphy McManus). They go on a quest to wipe out Boston of its evil and corrupt criminals.

There is a strong spiritual and catholic emphasis in the movie since the two brothers feel like this is a “calling” from God. In which the Lord tells them… “destroy all that which is evil…so that which is good may flourish.”

Alright, now that we got that covered let’s take a look at this prayer from the Boondock Saints movie.

What is the Boondock Saints Prayer?

This prayer was also known at the family prayer. Both brothers, would say it out loud in unison.

“And shepherds we shall be. For thee, my Lord, for thee.
Power hath descended forth from thy hand that our feet may swiftly carry out thy command.
So we shall flow a river forth to thee and teeming with souls shall it ever be.
In Nomeni Patri, Et Fili Spiritus Sancti.”

Is the Boondock Saints Prayer Biblical? Where is its Origin?

The prayer itself is not in the Bible, except for the closing of the prayer. It was written by the films directory Troy Duffy.

But is it Biblical? This is a tricky one. The thing is that something can be “biblical” as it is in scripture but it can be taken out of context and used wrongly. We see this happen all the time and that is exactly what Satan does. (Matthew 4:1-11) He takes God’s word and twists it for his liking and agenda.

Unfortunately, that is exactly what is happening in the Boondock Prayer. But let’s break down the prayer.

And shepherds we shall be. For thee, my Lord, for thee.

The mention of shepherds is throughout the Bible. Jesus is known as the great Shepherd and our word for pastor comes from there. Shepherds are meant to watch over and protect their flocks.

So, what they are saying in the prayer is Biblical. The actual phrase though is not mentioned in the Bible.

Power hath descended forth from thy hand that our feet may swiftly carry out thy command.

Again, we see this kind of thing throughout scripture. God does empower us with His Holy Spirit (Luke 24:49) to do “GOOD” works and produce “GOOD” fruit. And the fruit of the Spirit are love, joy, peace, patience, kindness, goodness, faithfulness, gentleness, and self-control. (Galatians 5:22-23)

On the flip side before the list of the Fruit of the Spirit we see the work of the flesh. This is what is listed:

Now the works of the flesh are evident, which are: adultery, fornication, uncleanness, lewdness, 20 idolatry, sorcery, hatred, contentions, jealousies, outbursts of wrath, selfish ambitions, dissensions, heresies, 21 envy, murders, drunkenness, revelries, and the like; of which I tell you beforehand, just as I also told you in time past, that those who practice such things will not inherit the kingdom of God. – Galatians 5:19-21 NKJ

Connor and Murphy are not functioning out of the fruit of the Spirit but the work of the flesh. Scripture is also clear that vengeance belongs to the Lord.

Beloved, do not avenge yourselves, but rather give place to wrath; for it is written, “Vengeance is Mine, I will repay,” says the Lord. – Romans 12:19

So we shall flow a river forth to thee and teeming with souls shall it ever be.

This is imagery is a play on how souls in scripture are symbolized as fish. (Mark 1:17)

The closing of the prayer is in the Latin. It’s a very common closing both Christians and Catholics use. It literally means: In the name of the Father, the Son, and the Holy Spirit. We see this mentioned in Matthew 28:19:

Therefore go and make disciples of all nations, baptizing them in the name of the Father and of the Son and of the Holy Spirit.

The Heart Behind the Prayer

The prayer itself isn’t a bad prayer (read more on Prayers We Shouldn’t Pray), the problem is that in the movie it was a prayer to justify their actions for vengeance, murder, hatred, and wrath. All things contrary to the heart and mind of God.

Their actions were not a command from God! This is why the movie received backlash from the Catholic Church. The Catholic Archdiocese of Toronto sent Tony Duffy a two-page letter disapproving of the movie. (Source)

There is also another prayer mentioned in the movie known as the Il Duce’s Prayer. I won’t go into detail about it. You can read it below.

But I do want to state this. It is also not in scripture and screams anger, wrath, and vengeance. This is not of God.

And when I vest my flashing sword,
And my hand takes hold in judgment,
I will take vengeance upon mine enemies,
And I will repay those who hase me.
O Lord, raise me to Thy right hand,
And count me among Thy Saints

Whosoever sheds mans last blood,
By man shall his blood be shed.
For In the Image of God, made He man.
Destroy that which is evil,
So that good may flourish.
And I shall count thee among my favored sheep,
And you shall have the protection
Of all the angels in Heaven.

Never shall innocent blood be shed,
Yet the blood of the wicked shall flow like a river.
The three shall spread their blackened wings,
And be the vengeful striking hammer of God.

What Does the Boondock Saints Prayer Mean?

So, what does this prayer even mean?

Well, according to the movie it’s a prayer stating back to God we will do your work (be shepherds) and that power has already been given to them but asking God to let them execute that power quickly.

The third line can actually mean two things. It can mean that the people they remove and kill that their souls will go to God and be judged. A river, teeming meaning many people. The river could also be symbolic of the blood shed.

Or it could mean that the brother’s by removing the evil will be able to bring souls (people) to the Lord.

Then the end is just a common closing, but done in latin. I guess to be fancy or they think it’s more powerful. <— I wish you could hear the sarcasm in those words.

Now, let’s say a true man of faith who loves God and knows the Word. And let’s say they pray that prayer then the meaning would not mean to be vengeful, but to be a good shepherd (pastor) to people.

To help them, and love them. To have God empower you so that you can do the will of the Father which is to make disciples, preach the gospel, and love people. So, that many souls would be won for God and have eternal life.

The Meaning of Aequitas Veritas

I wanted to touch on this a bit before we close. Throughout the movie you see the words aequitas veritas. Once again Troy Duffy infuses words from latin language, but are significant in Catholicism.

Aequitas is the Latin concept for justice.

Veritas is the Latin word for truth

Latin, literally “truth, truthfulness,” from verus “true” (from PIE root *were-o- “true, trustworthy”). Latin phrase in vino veritas (1590s in English; “in wine, truth,” that is, “the truth comes out when one has been drinking”) is attributed to Pliny the Elder, though there is a Greek version of it. (Source)

Well, there you have it! I hope this brought some clarity to the famous boondocks saint prayers to their meaning and origin. The reason I believe there was popularity to the movie is because we all crave justice. And sometimes our justice system is corrupt and we are left in the hands of the unjust. So, there is desire for us or others to arise and claim justice.

The problem is we can reclaim justice well and good, or we then can become just as corrupt as those who are unjust.

For more on prayer check out my Christian Faith Articles.