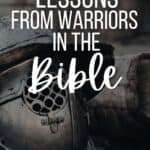 In this post, we explore 5 warriors in the Bible and what we can learn from their lives. So, grab your Bible, and let’s dive in…

The Bible is full of warriors who fought for the peace and freedom of their nations. Warriors were important because they formed the defense forces that protected their nations from their enemies. There is a lot we can learn from these warriors that we can apply in our lives. As we are called to be warriors in the spirit realm.

The Word says that the Lord is a warrior, and this means that He is the one who gives warriors the strategies to win in battle.

5 Mighty Warriors In The Bible

But God said to me, ‘You are not to build a house for my Name, because you are a warrior and have shed blood.’ – 1 Chronicles 28:3 NIV

One man who was a great warrior was King David. God called him a warrior, and he was instrumental in defeating the enemies of Israel. He is unique in the sense that he wasn’t just a warrior, but a king, prophet, worshipper, and more.

When the angel of the Lord appeared to Gideon, he said, “The Lord is with you, mighty warrior.” – Judges 6:12 NIV

Gideon was a mighty warrior, who defeated the Midianites. They had oppressed the Israelites for seven years. They would come at harvest time and take off with their harvest from the farmlands. Gideon did not see himself as a warrior at first because he thought that he was the least in his family. BUT GOD…. He saw a different side of Gideon and knew He could use him.

Now Naaman was commander of the army of the king of Aram. He was a great man in the sight of his master and highly regarded, because through him the Lord had given victory to Aram. He was a valiant soldier, but he had leprosy. – 2 Kings 5:1 NIV

Another great warrior was Naaman, who was the commander of the army of the king of Aram. Through him, God had given Aram victory in battle. One thing that Naaman battled was leprosy, and he was cured when he went to see the prophet Elisha for healing.

You will become pregnant and have a son whose head is never to be touched by a razor because the boy is to be a Nazirite, dedicated to God from the womb. He will take the lead in delivering Israel from the hands of the Philistines. – Judges 13:5 NIV

When Samson was born, an angel of the Lord told his mother that she would give birth to a son who would begin the deliverance of Israel from the Philistines. He once killed a thousand men with the jawbone of a donkey, but that’s just one story out of countless ones. You can read more about Samson here: Samson In The Bible: Powerful Lessons From His Life

Jephthah the Gileadite was a mighty warrior. His father was Gilead; his mother was a prostitute. – Judges 11:1 NIV

He was driven away by his stepbrothers because of his mother. When Israel was under attack from the Ammonites, the elders of Gilead went looking for Jephthah to be their commander and lead them in battle.

7 Lessons We Can Learn From Bible Warriors

As believers, we are always fighting a war with the enemy of our souls. Fortunately, we have God on our side, and He helps us fight until we win the battle in His name. Remember our victory is in Him! He has equipped you for the battle and will never let you fail.

They triumphed over him
by the blood of the Lamb
and by the word of their testimony;
they did not love their lives so much
as to shrink from death. – Revelation 12:11

Amen and AMEN! Thank you Jesus!

If you would like to leave me a comment you can do so below! I would love to hear from you and learn what God is doing in your life.

Thank you so much for sharing.

I want to appreciate your insight in the word of God. I have read it and got inspired and blessed.

My name is Jose Manuel Silerio Sabino in Tijuana, Mexico. I was deported for the second time in Dec. 2017. In 2018 the Lord reached me through my Pastor's Martin and Marta Rosales from Rialto, Ca. who opened up a non profit home here in Tijuana. God has been working in my life in a great way, I'm a former gang member, drug and alcohol user but the relentless work my Pastor's do for the ministry through God has been a great example to me and others who have found themselves hopeless on the streets of Tijuana, today you have been a blessing to my life, I was looking up some info on mighty warriors while I work and thanks to awesome servants of God like yourself I am able to grow spiritually daily, thank you! May God continue to perfect the work He started in you, God bless!

Thank You so Much Sis for this great lesson. God bless you Yes Indeed Our Victory is in Him.