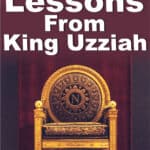 In this article we will look into the history and life of King Uzziah in the Bible and what we can learn from this once powerful king of Judah. Grab your Bible and let’s get started…

I love digging into Bible stories and learning from different men and women. I have written on Hannah, Jabez, and Jonah.

And this time around I want to study on one of the kings in the Bible. Now their are some amazing and popular kings in the Bible…David and Solomon come to mind. But I wanted to glean from one who is not as popular. So, here we are! Ready to learn some important life’s lessons from King Uzziah.

Now before we dive into the lessons I thought it would be good to touch base on who King Uzziah was. This will give us a better understanding of his story.

A brief History of King Uzziah

Uzziah was the son of King Amaziah. He took the throne from his father when he was sixteen years old. He was the king of Judah and he ruled for total of fifty-two years. According to scripture he is a king that did right in the eyes of the Lord. (2 Kings 15:3)

When King Uzziah sought God, he was successful, and when he became proud, he faced the Lord’s judgment and tainted his legacy. Today’s article will focus on two themes, that is, the success that comes with walking with God, and the downfall that comes with pride.

Once pride entered his heart things went south for Uzziah. He made some poor decisions and overstepped his authority by trying to fulfill the rituals of the priests. This opened him up to punishment which led him to be stricken with leprosy. Ultimately, it was this horrific skin disease that took his life.

Sometimes it’s fun to digest information in the form of questions and answers. So, I decided to do a FAQ section all about King Uzziah! If you have a question about him that isn’t below. Feel free to ask me down in the comment section and I’ll do my best to add it here and answer it!

Uzziah is the most well known name for the king. But in scripture he is also known as Azariah or Azarias. Uzziah is also spelled Ozias but not in Bible

According to the Strong’s Concordance Uzziah means “My strength is Jehovah” in Hebrew.

He was 16 years old when King Uzziah took the throne from his father King Amaziah.

He reigned for 52 years as the king.

He died of leprosy.

He ruled of the kingdom of Judah.

He sought God during the days of Zechariah, who instructed him in the fear of God. As long as he sought the Lord, God gave him success. (NIV)

2 Chronicles 26:5 tells us that as long as King Uzziah sought the Lord, God made him prosper. His success was not from his strength or wisdom but came to him divinely. He brought prosperity to Judah, and defeated his enemies – the Philistines.

I also want to point out that Uzziah was willing to be instructed by the prophet Zacharia. This shows a level of humility and willingness to learn.

Lesson 1: Great Success Comes From a Relationship with God

King Uzziah did certain things that greatly blessed the people of Judah because God was with him. He built towers in Jerusalem and the desert, and dug wells for his great herds. He had farmers and vinedressers to take care of the produce of the land. This means that there was plenty to eat and drink for the people of Judah.

When you have a relationship with God, you desire His righteousness, and it drives you to do the right thing when relating with others. You are careful to obey the commands of God, and this brings great success into your life and those around you. We succeed when we follow God’s direction for our lives because we tend to avoid pitfalls along the way.

God told Joshua that the key to success and prosperity in life was obeying His Word (Joshua 1:8). And remember success doesn’t always look like materialistic gain. God can manifest success in so many ways.

No matter where you are at seek God today and He will order your life, and make you successful. Your relationship with God will give you fulfillment in life, and His righteousness will produce godly fruit in you.

Lesson 2: You Will Defeat Your Enemies with God’s Help

God helped King Uzziah defeat the enemies of Israel. The king had a great army of men of valor, who fought with mighty power and helped him defeat his enemies.

We face enemies all the time. These evil spirit’s can use other individuals or our personal weaknesses to bring destruction, sabotage, fear, and more into our lives. (Ephesians 6:12)

Don’t forget that we have an enemy who prowls around looking for who to devour.

We need God’s help to defeat our enemies and overcome these attacks. We don’t have to fear them because God promises to be with us wherever we go. You are always assured of victory against your enemies because you have a mighty God on your side.

In Luke 10:19, Jesus has given us the authority to trample on snakes and scorpions and overcome all the power of the enemy. He ends by saying that nothing will harm us. Stay close to Jesus and you will be VICTORIOUS!

Lesson 3: Pride Will Make You Overstep Your Boundaries

In the days of the Old Testament, the Levites were in charge of temple duties. The priests are the ones who could offer sacrifices and make offerings to God in the temple. This must have been clear to King Uzziah but with his heart puffed up due to pride, he walked into the temple one day ready to burn incense on the altar.

Azariah, the priest, went after the king with other priests to stop him from burning incense and attracting the wrath of God. King Uzziah was furious and would not relent, until God struck him with leprosy. It specifically says that the leprosy (an infectious disease that causes severe, disfiguring skin sores and nerve damage) even appeared on his forehead. Revealing to all his folly.

Pride made him overstep the temple boundaries that God had put in place. He wasn’t content with just being king, but wanted to show that he could be high priest as well. When God has NOT called him to that.

Pride makes us think that we are above God’s law and can do as we please. Unfortunately, it always leads to a downfall, which is painful to deal with. The Bible tells us that God opposes the proud but gives grace to the humble. When we humble ourselves, God can step in and help us where we fall short.

But he gives us more grace. That is why Scripture says:

“God opposes the proud
but shows favor to the humble.” – James 4:6 NIV

When King Uzziah refused to heed the words of Azariah, the priest, he fell under God’s judgment, and God struck him with leprosy all the way to his forehead. Leprosy can easily be hidden if it’s on your arms, legs, or torso. But on the face everyone will see it. This is what made him leave the temple.

From being a successful and famous king, he became an isolated man hiding his leprosy until he died. The interesting thing to note is that it never mentions Uzziah repenting for his pride and asking God to cleanse him. Scripture doesn’t say if he regretted his decision or became embittered by what happened.

But there is good news for us on this life lesson. We don’t have to suffer judgment like King Uzziah because God gives us the option to repent. He promises that when we confess our sins, He will forgive us, and cleanse us from unrighteousness (1 John 1:9). If you are guilty of pride, ask God to forgive you and help you walk in humility.

God’s mercy prevails over His judgment because it is not His will that anyone should perish. The story of Uzziah teaches us that we should not allow success to make us be full of pride in our hearts. God does not lift us up so that we can boast or put others down because they are not on “our level.” He lifts us up so that we can have more impact for His Kingdom.

Close All Your Doors (lesson 5)

In the twenty-seventh year of Jeroboam king of Israel, Azariah son of Amaziah king of Judah began to reign. 2 He was sixteen years old when he became king, and he reigned in Jerusalem fifty-two years. His mother’s name was Jekoliah; she was from Jerusalem. 3 He did what was right in the eyes of the Lord, just as his father Amaziah had done. 4 The high places, however, were not removed; the people continued to offer sacrifices and burn incense there. – 2 kings 15:1-4 NIV

I find it very interesting that it says that Uzziah did was right in the eyes of the Lord….HOWEVER….

He didn’t take down the high places. Say what? Why?

I firmly believe this small mistep caused his people and nation to continue to sin against God and potentially open himself up to spiritual attack like planting pride into his heart.

An example is to say you are Christian and love Jesus, but you are into horoscopes and reading your predictions daily. That 10% is like an open door that enemy can walk through and wreck havoc in your life. As Christian we want our house (we are the temple of the Holy Spirit) to have all it’s doors closed. We are 100% for the Lord! No room for anything else in our heart, mind, and life.

As you reflect on the lessons from the story of King Uzziah remember you can learn from someone high times and low times. And I hope you really gleaned from this article.

If you would like to leave a comment you can do so below. I would love to hear what you are learning about King Uzziah.

I loved your lesson and want to thank you so much for your clarification of pride and Gods plan for our lives to lift up others. As a small business owner taking care of employees I want God to continue his wonderful blessings so that we can help our employees and their families. I took this lesson to heart and will be mindful of my interior dialogue with God. Thanks again, you are truly inspired. Dee