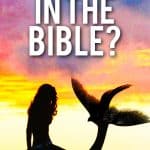 In this article we will explore this interesting study and look at mermaids in the Bible. So, grab your Bible and get ready to go deep…

We have touched on the topic of Unicorns in the Bible. But what about mermaids?!

It may sound weird to ask “are mermaids in the Bible?” And if you had asked me a couple of days ago I would have laughed and said, “NO WAY!”

I mean have you ever read Bible verses about mermaids? Uhhhhh, NO! This isn’t a Disney movie…

But as I began to study God’s word I was shocked at what learned. And I hope this study encourages you to get more into God’s word!

And if you are dreaming about mermaids then I encourage you the check out:

Biblical Meaning of Mermaids In Dreams

Alright, let’s get down to some mermaid business!

Mermaids In the Bible

Does the Bible mention mermaids?

A simple search on Biblegateway.com for mermaids gets you this:

Yup, a big fat zero! Even in the KJV! So, why on earth is there like 1000 word post here all about mermaids and the Bible?

In the book of Judges, we can read the story of Samson. And his whole story is about defeating the philistines (of course with a lot of bumps on the way). But at the end of his life, Samson took down the Philistines god, Dagon. BOOM!

Now what does that have to do with mermaids? Well, check it out…

Yup, that’s Dagon. He was part man and part fish…he was a merman. Say what!?

Historically it is said that Dagon was a god of fertility. Representing wheat and fish which both multiply quickly.

Dagon is mentioned again in 1 Samuel 5 when the Ark of the Covenant was taken by the Philistines. Which is an awesome story of how God shows off His power to the Philistines and their wimpy fish god.

For more on this weird false deity…check Dagon in the Bible.

So, we do see a mermaid in the Bible. But not what you would think. It’s spiritual in nature and it doesn’t prove the existence of merpeople or anything. My personal belief is that it’s an evil spirit.

So, Are Mermaids Evil?

Dagon and many other false mermaid gods in antiquity and old folklores tend to depict mermaids and sirens as evil creatures of seduction and murder. But in some greek mythology, they can show them being kind.

The thing is we want to view them in light of the Bible! The Word of God is our source of truth.

Their seducing ways makes sense if Dagon and other similar deities were deities of fertility. (See Atargatis)

This also sheds more light on the story of Samson and his incredible weakness towards Philistine women. And Delilah’s incredible hold on him. Perhaps these women were operating under the influence of Dagon (evil spirit of seduction)?

Also, in the story in 1 Samuel 5, on vs 9 it says that the Philistines broke out in tumors on their private parts. Ouch!

We don’t see this in a lot of modern translations but it’s in the KJV and the septuagint (the earliest extant Greek translation of the Old Testament from the original Hebrew.)

Interesting that the sickness affected their fertility and sexual ability. Proving Dagon was no match for the one true God!

I know this may be hard for us to wrap our heads around when we grow up seeing things like The Little Mermaid.

On a spiritual level, I personally believe these creatures are evil. Despite what fairy tales and Disney tell us.

Bible Verses About Mermaids… or should I say Merman?

As I mentioned earlier there is no mention flat out Bible verses that use the word mermaid(s) or merman. The only thing is the mention of Dagon.

If you are interested in reading these verses they are below.

Judges 16:23 NKJV – 23 Now the lords of the Philistines gathered together to offer a great sacrifice to Dagon their god, and to rejoice. And they said: “Our god has delivered into our hands Samson our enemy!”

5 Therefore neither the priests of Dagon nor any who come into Dagon’s house tread on the threshold of Dagon in Ashdod to this day. 6 But the hand of the LORD was heavy on the people of Ashdod, and He ravaged them and struck them with tumors, [both] Ashdod and its territory.

9 So it was, after they had carried it away, that the hand of the LORD was against the city with a very great destruction; and He struck the men of the city, both small and great, and tumors broke out on them. 10 Therefore they sent the ark of God to Ekron. So it was, as the ark of God came to Ekron, that the Ekronites cried out, saying, “They have brought the ark of the God of Israel to us, to kill us and our people!”

11 So they sent and gathered together all the lords of the Philistines, and said, “Send away the ark of the God of Israel, and let it go back to its own place, so that it does not kill us and our people.” For there was a deadly destruction throughout all the city; the hand of God was very heavy there.

12 And the men who did not die were stricken with the tumors, and the cry of the city went up to heaven.

My Final Thoughts On Mermaids In the Bible

Well, there you have it! the Bible doesn’t mention mermaids as we would think. But scripture does mention a false deity that depicts a mermaid-like body. Who would have thought!

And ancient people used to worship and sacrifice to this evil spirit. What is really interesting is that this imagery of half fish and half human has survived centuries to still be shared in modern-day movies, and books. Because it’s more than just a human creation, this is spiritual. Pretty eye-opening and interesting!

Well, I hope you enjoyed this little study on the topic of mermaids in the Bible (want more on mermaids check out this post:  Biblical Meaning of Mermaids In Dreams) .

For more interesting posts check out:

Are Unicorns in the Bible?

Are Butterflies in the Bible?

And like always feel free to leave me a comment below! I would love to hear what God is doing in your life!

Wow, thank you so much for this! Sometimes hard to explain to someone else, but I think I'll be sending this info along just as is...

So awesome 😶 Now I have a reason not to watch Little Mermaid 😊👌🏼 Thanks for the post Melissa!

Interesting Study! I really enjoy your research but, more importantly, the fun way you present the information. I found myself chuckling several times. Good job!