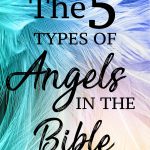 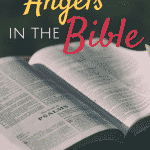 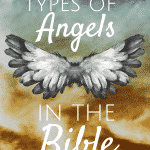 In this article we will look at the 5 types of Angels in the Bible. We will be digging deep into the Word and discovering who these heavenly messengers are. So, grab your Bible and let’s learn about God’s angels.

Angels are one of those fun topics. I love learning about God’s messengers and how they function in the spirit realm. I have created a selection of articles on angels. All of them can be found here ANGELOLOGY. Here are some of the posts you can discover there…

I also believe in understanding how angels operate is important for Christians. Too many times we think angels are just going around about the earth watching people and protecting them. And in some cases yes they are protecting, but that’s only a small part of what they can and will do.

Let’s build a little foundation before we start!

The Hebrew word for angel is mal’ak and the greek is angelos (you can see here where we get our English word from.) These words both mean the same thing… “messenger.”

We also need to realize that angels are so much more than our personal bodyguards (Daniel 6:22). They act as God’s agents on the Earth.

I absolutely love what C.S Lewis says about angels…

It makes me chuckle because there is so much truth in that quote. For us to really understand angels we can’t look at man’s idea or thoughts on it. But we have to look to God and His Word.

When God created the heaven and the Scripture we can see five types of angels. We’re going to crack open our Bibles and take a look.

The 5 Types of Angels In The Bible

Archangels are probably the most well known type or angel. But from the name it might be more of a rank then an actual type. The word arch means, “Chief.”

This gives us the idea that there is ranking or classes of angels in heaven. (Colossians 1:16-17, Ephesians 3:9-10) The word archangel is only seen twice in scripture and both times are in the New Testament.

The only named archangel is Michael, but many classify Gabriel as an archangel since he referred throughout scripture (Old Testament & New Testament). It also states in Luke 1:19 that he stands in the presence of God.

For the Lord himself will come down from heaven, with a loud command, with the voice of the archangel and with the trumpet call of God, and the dead in Christ will rise first. 1After that, we who are still alive and are left will be caught up together with them in the clouds to meet the Lord in the air. And so we will be with the Lord forever. –Thessalonians 4:16

From these two scriptures we can come to the conclusion that these type of angels carry some level or authority.

Most of the time we think cherubs as these cute little-naked babies flying around with wings. Those are actually called putti angels. At least that’s what Renaissance and Victorian artist depicted. But that’s not what we see in scripture.

The prophet Ezekiel describes these amazing spiritual beings as:

And this was their appearance: they had a human likeness, but each had four faces, and each of them had four wings. Their legs were straight, and the soles of their feet were like the sole of a calf’s foot. And they sparkled like burnished bronze. Under their wings on their four sides they had human hands. And the four had their faces and their wings thus: their wings touched one another.

Such were their faces. And their wings were spread out above. Each creature had two wings, each of which touched the wing of another, while two covered their bodies. And each went straight forward. Wherever the spirit would go, they went, without turning as they went.

Cherubs are seen throughout scripture as angels who guard (as in the garden of Eden) and surround the ark of the covenant, tabernacle, and temple. Lucifer is also considered an anointed cherub.

If you are curious to go deeper on this type of angel. I encourage you to check out my post Cherubim: Cherub Angels of the Bible.

These angels are all about the presence of God. They fly around the throne room of God declaring the holiness of God. According, to the Strong’s Concordance Saraph are described as – “Burning.” These angels are on fire, worshipping the God the All-consuming Fire!

These majestic beings with 6 wings, that cried out to each other about the holiness of God. We only see these angels mentioned in the book of Isaiah. You can learn more about Seraphim Angels Here.

“Holy, holy, holy is the Lord Almighty;
the whole earth is full of his glory.”

At the sound of their voices, the doorposts and thresholds shook and the temple was filled with smoke.

Then one of the seraphim flew to me with a live coal in his hand, which he had taken with tongs from the altar. With it he touched my mouth and said, “See, this has touched your lips; your guilt is taken away and your sin atoned for.” – Isaiah 6:1-8

These angels are also known as “living beasts” or “the four beasts.” They minister by worshipping and glorifying God. Some believe that these angels are the same angels Isaiah saw in His vision which he calls seraphim.

It’s hard to know since both description in Isaiah are similar to those in Revelation yet not clear enough to know for sure.

When I was a little girl I had this dream that I remember so vividly. I was somewhere beautiful and it was so bright and white. And under this pink blooming tree was like a bull sitting under it but sitting like a man. And it was covered from head to toe with eyes. I remember just staring at it in awe. No fear…it was beautiful. Hard to describe. I then I woke up.

When I became a Christian at the age of 15 I read about cherubim and the living creatures in the Bible….I was shocked. I still don’t know exactly what I saw but seeing in scripture makes me wonder if it was some type of angel.

Also in front of the throne, there was what looked like a sea of glass, clear as crystal.

Whenever the living creatures give glory, honor and thanks to him who sits on the throne and who lives for ever and ever, -Revelation 4:6-9

This may seem like a broad way to categorize angels, but these angels don’t seem to fall into an angelic type or rank from what we see in the Bible. This doesn’t mean they are not powerful beings. They still work for God and do His work.

I love this verse because it means they are working among us. We can also see this in the account of Peter and his angel. – Acts 12:15

Perhaps one day when we are in heaven we will understand these angels more.

Let’s do a quick recap of the different types of angels:

If you would like to dig deeper on the subject of angels in the Bible. You can download this free PDF of each type of angel. A total of 5 pages to help you! Just feel out the form below.

Those are the 5 types of angels found in the Bible. If you would like to learn more don’t forget to check out these blog posts as well.

Can a seraphim be a guardian angel??

I’ve had dreams of seeing Angels with grey wings grabbing people off a high cliff and flying them to safety and down passed the cliff. I don’t know what it means.

This is indeed an interesting topic. I, personally think that there are more types of Angels in the heavens than you have mentioned. Seraphim, Cherubim, and the Living Creatures are different from each other...

I bless the womb who bore thee and the day you were born. Your blog on angelology has been of tremndious blessing to my knowledge about the ministering spirits. I greatly appreciate your frontline efforts on the subject matter of angels. Thanks and God bless you,

I’m writing to tell you that I had a angel encounter. It was in a grocery store. I was shopping at the meat I looked up and a lady was there her name was Kristine. I said my name too. She had a polkadot shirt on. We shook hands.all I of a sudden she was an angel she told me she was sent by God to tell me that when my time comes I won’t be alone. She will be with me! Then she was gone.