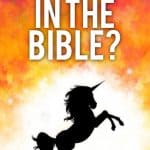 Have you ever wondered are unicorns in the Bible? In this fun study, we will look at the King James Bible says and if unicorns are Biblical.

Are unicorns biblical? well, technically yes! In over 33 translations of the Bible including the KJV we see unicorns being referenced.

But are these the unicorns that little girls dream of getting for their birthday? You know those beautiful blemish-free white horses with a sparkly horn. And some even sport an epic rainbow-colored mane and tail!

Well, there is only one way to find out. Let’s dig deep into God’s word and see what it says!

And if you are curious about other mystical creatures check out Are mermaids in the Bible!

To make things easier here is a nifty table of contents you can use to click around. But I encourage you to read through it all because it’s super interesting. I mean we are talking unicorns and the Bible!

What Does the Bible Say About Unicorns?

In the KJV we see unicorns being referenced a total of 9 times. And you can read those verses by clicking here: Bible Verses about Unicorns.

We see that in the Hebrew the word unicorn is re’em. There is still a lot of speculations on what this word fully means. But they have translated it to mean wild bull.

Some scholars believe that this “unicorn” is the extinct animal, aurochs. An extremely large species of cattle. The Assyrians called them rimu. And according to archaeological studies, their horns were so symmetrical that they would look like one horn if the aurochs were viewed from the side.

Others believe it’s in reference to the Arabian oryx. Which can still be found today in modern Israel. And I will say those are some impressive horns.

Ok, so we are getting an idea to what the Hebrew is alluding to and what scholars are saying, but why use the word, unicorn?

Well, let’s dig into the Greek and see the origin of why the KJV calls this animal a “unicorn“.

A group of 70 scholars around 250 B.C were translating the Hebrew Bible into Greek. These scholars believed that a re’em was a one-horned creature. So, re’me was translated into the Greek word monokeros meaning one horn or a unicorn. This is why we see the word unicorn in the King James Version.

But no mention of this unicorn looking like well a unicorn! Twilight Sparkle on the My Little Ponies is out of luck! All we know is that this creature has one horn.

So, let’s now look at scripture to see how the Bible describes this creature.

What Does the Bible Say About Unicorns? How are they described?

We don’t have a ton of references to use, to get a nice crystal clear picture of what the Bible says is a unicorn. But we do have enough to get a rough idea.

Here are some of the key characteristics:

From these references you can lean toward this unicorn either being from the Bovinae (cattle) family or Rhinocerotoidea (rhinoceros) family. There is no mention of these unicorns being horse like in appearance or function.

Sorry, My Little Ponies you are not the Biblical unicorn we see in the King James Bible.

Now, this account is not taken from the Bible, but I think it’s super interesting on a historic point of view.

“They have wild elephants and plenty of unicorns, which are scarcely smaller than elephants. They have the hair of a buffalo and feet like an elephant’s. They have a single large black horn in the middle of the forehead . . . They have a head like a wild boar’s . . . They spend their time by preference wallowing in mud and slime. They are very ugly brutes to look at.” – Marco Polo: The Travels, translated by Ronald Latham

I’m pretty sure that is NOT the unicorn little girls want.

Marco Polo is clearly describing some type of rhino. So, its safe to say that the unicorns that existed in the Bible were either some type of extinct or modern-day bull or rhino.

I mean even some peeps who think rhinos are just fat unicorns…they even sell shirts about it! Who would have thought!?

Below are the 9 scriptures about unicorns from the KJV. To make things easier I have highlighted the word unicorn.

Numbers 23:22 KJV – 22 God brought them out of Egypt; he hath as it were the strength of an unicorn.

Numbers 24:8 KJV – 8 God brought him forth out of Egypt; he hath as it were the strength of an unicorn: he shall eat up the nations his enemies, and shall break their bones, and pierce [them] through with his arrows.

Job 39:9-10 KJV – 9 Will the unicorn be willing to serve thee, or abide by thy crib? 10 Canst thou bind the unicorn with his band in the furrow? or will he harrow the valleys after thee?

Psalm 29:6 KJV – 6 He maketh them also to skip like a calf; Lebanon and Sirion like a young unicorn.

Isaiah 34:7 KJV – 7 And the unicorns shall come down with them, and the bullocks with the bulls; and their land shall be soaked with blood, and their dust made fat with fatness.

Well, there you have it! You have just learned about unicorns in the Bible! Wahoo! Who would have thought? Now, when some one asks you “Are unicorns mentioned in the Bible?” You can confidently say “YES! But not the unicorns you think!”

If you would like to dig deeper into God’s word then please check out my other Christian articles, like what does it mean to wait on the Lord, and are butterflies in the Bible?

And like always feel free to leave me a comment below! I would love to know what you are learning in God’s word.

Greetings I'm new here. I'm a smallest minister of God and serving the LORD. Through a thing searching i came to visit this site and i love it. Because it is very good study with details, Clearly describing and best managing the concepts with references. I jus say May God bless you alot and your team and family as well!

Hi Pastor Waris, I am so blessed by your kind words. I am glad my site is a blessing to you. I pray God blesses you and the work of your hands. That you may see many come to Christ and those you pastor grow in the faith.

Truly amazing info. Quite strange how so many different things are taken from the Bible and turned into something else by the world. For example, rainbows and unicorns. Thank you for your time and research on this!

Well researched and an interesting article!