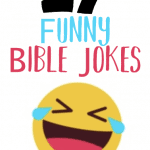 In this article we will enjoy this collection of funny Bible jokes. They range from funny, silly, and some are down right cheesy a.k.a dad jokes! Great for kids and adults. So, let’s get started…

Who doesn’t love a good joke? I know I do! And after writing my post on Bible riddles, Christian Memes and Christian Pick Up Lines I thought it would be fun to have a post all on Bible jokes. All these jokes are clean and kids can enjoy them. Though some might be a little over their heads if they have no Bible knowledge.

Also, these great for opening up a sermon, or teaching for a small group, or Sunday school class. It can help your audience or students stay engaged through the meeting or teaching. You will find some short Bible jokes and some that are a little longer to use.

Alright enough of that! Let’s enjoy some jokes! These will make your dad proud…if he hasn’t used them already.

Seems there were these three professionals sitting around talking about the oldest profession.

The Doctor says, “Well, the Bible says that God took a rib out of Adam to make woman.  Since that clearly required surgery, then the oldest profession is surely medicine.”

The Engineer shakes his head and replies,”No, no. The Bible also says that God created the world out of void and chaos.  To do that, God must surely have been an engineer.  Therefore, Engineering is the oldest profession.”

The Politician smiles smugly and leans discreetly forward.”Ah,” he says,”but who do you think created the Chaos?”

What’s a dentist’s favorite hymn?…Crown him with many crowns.

What kind of car does Jesus typically drive?… A Christler.

Did you know baseball was mentioned in the Bible?… It starts off “In the big inning…”

What kind of man was Boaz before he got married?… He was Ruth-less.

If Goliath would come back to life today, would you like to tell him the joke about David and Goliath?… No, he already fell for it once.

What’s a missionary’s favorite type of car? … A convertible.

Yo mamma so old she pre-order the Bible. (oh snap!)

On the Ark, Noah probably got milk from the cows. What did he get from the ducks?… Quackers.

Why is it a bad idea to fart in church?… You have to sit in your own “pew”

An elderly woman had just returned home from an evening church service when she realized there was an intruder in her home. Seeing that he was in the act of robbing her home of its valuables, the lady yelled “Stop! Acts 2:38!”

Hearing her, the burglar stopped dead in his tracks and stood motionless. The woman calmly called the police and explained what was going on.

As the officer cuffed the man to take him in, he asked the burglar, “Why did you just stand there? All the lady did was yell a Bible verse at you.”

What excuse did Adam give to his children as to why he no longer lived in Eden?…Your mother ate us out of house and home.

In the beginning, God created the earth and rested.

Then God created Man and rested.

Since then, neither God nor Man has rested.

Why didn’t they play cards on the Ark?…Because Noah was standing on the deck.

When was the first math homework problem mentioned in the Bible? …When God told Adam and Eve to go forth and multiply.

How do we know Peter was a rich fisherman?… By his net income.

Why did Noah have to punish and discipline the chickens on the Ark?… They were using fowl language.

A teacher asked her Sunday School class to draw pictures of their favourite Bible stories.

She was puzzled by a boy’s picture which showed four people on an aircraft, so she asked him which story it was meant to represent. ‘The flight to Egypt,’ he replied. ‘I see…And that must be Mary, Joseph, and Baby Jesus,’ she said.’But who’s the fourth person?’

The good Lord didn’t create anything without a purpose……Mosquitoes come close, though.

What do donkeys send out near Christmas?… Mule-tide greetings.

Which area of Palestine was especially wealthy?… The area around the River Jordan. The banks were always overflowing.

Where is medicine first mentioned in the Bible?… When God gave Moses two tablets.

How many people can you fit in one Honda?… Well, the Bible said that all 12 disciples were in one Accord.

One day an angel appeared to Adam. The angel said, “Adam, I’ve got great news. God is going to create something wonderful for you.” Adam said, “Oh, what is it?

The angel continued, “This is going to be wonderful. This woman will be made to be a lot like you physically, only much more beautiful. She will live to serve you at all times. When you are tired, she’ll give you a massage. When you are hungry, she’ll feed you. She’ll come and bow down to you in the morning and when you return from working in the garden in the evening. She’ll live to serve your every pleasure each day.”

“In addition,” the angel continued, “she will never argue with you or complain. She wont nag you or talk back to you either. For every command you give her, she’ll simply reply, “yes master.” She’ll clean your house, and tend to your every desire.”

Adam had a sparkle in his eye and said with excitement, “Wow, that sounds amazing. I’d really like to have something like that. But what’s it going to cost me?” The angel said, “Well Adam, it’s going to cost you your right arm, and a leg.”

Adam thought about it for a while, and then replied, “What can I get for just a rib?”

What was the first word out of Adam’s mouth when he first saw Eve?… Whoa man! Thus, the word “woman” was created.

Why did the unemployed man get excited while reading his Bible?… He thought he saw a job.

Why couldn’t Jonah trust the ocean?… He just knew there was something fishy about it.

What kind of cell phone did Delilah use?… Samson

Who do mice pray to?…Cheesus.

Did Eve ever have a date with Adam?… No, just an apple

Well, there you have it…I hope you enjoyed this collection of Bible jokes! Feel free to drop me a comment below. I would love to hear from you!

When was the first radio mentioned in the Bible ? Answer: It’s when the Lord took a rib from Adam and created a loud speaker.

I hope we'll get more Biblical jokes. I enjoyed it.

those where great jokes!