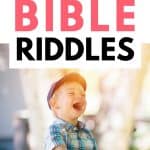 In this article we will look at a fun and challenging collection of Christian and Bible riddles. Great for all ages to enjoy and to challenge themselves with. So, let’s get started…

Bible jokes are great and I love a good laugh I can get from Christian memes, but Bible riddles are a fun way to tease your brain and give you a little challenge.

So, I have collected these 24 little Bible brain teasers for you to enjoy. I hope they bring a smile to your face and get you thinking.

Below you find the riddles in the blue boxes and under each one will have the answers. Some of these riddles are silly, some are more serious, and some are who am I bible riddles (Bible character riddles). But no matter what they are great for kids, youth, and adults!

What kind of lights did Noah use on the ark?

Who was the only person in the bible without a father?

Answer: Joshua, because he was the son of nun

What animal could Noah not trust?

How does Moses make his coffee?

I am the greatest financier in the Bible. I floated my stock while everyone was in liquidation. Who am I?

Who is this man?

What did Adam say on the day before Christmas?

I had many locks that don’t need a key
I was far too many for you to count me
I was never to be shortened, for a vow had been said
I was a symbol of strength that flowed from the head
But in a moment of weakness, my secret was out
I lay all in pieces when she gave the shout
I’m in the Bible – what am I?

From my shoulders and upward, I was higher than any of the people? Who am I?

Why couldn’t Noah catch many fish?

Answer: He only had two worms. (source)

Why couldn’t Jonah trust the ocean?

Answer: Because he knew there was something fishy about it.

What excuse did Adam give to his children as to why he no longer lived in Eden?

Answer: Your mother ate us out of house and home.

I look like the letter t and am a symbol of Christianity. What is it?

What’s got a face but it’s not a human or an animal?

I kept him steady and others away
I kept them safe and showed the way
Once thrown down upon the ground
I came alive with a hissing sound
I hit the rock as he was told
And that was when the water flowed
What am I?

Why did the unemployed man get excited while looking through his Bible?

Answer:  He thought he saw a job.

Where is the first tennis match mentioned in the Bible?

How long did Cain hate his brother?

Answer: As long as he was Abel.

I can be carried but not touched
I have two on the outside and ten on the inside
Everyone wants to catch a sight of me
But I’m kept out of sight
I was lost and found; then found but now I am lost
I’m in the Bible – what am I?

Answer:  The Ark of the Covenant

Why did Eve want to leave the Garden of Eden and move to New York?

Answer:  She fell for the Big Apple

There was a man who went one day
On top a Joppa house to pray,
And while he waited for his meat
He dreamed he saw a great big sheet
Let down from heaven, and inside
Fowls and creeping things did ride,
The one who prayed was told to eat,
For God had cleansed this “common” meat.
Who was he?

I was the king who was encouraged by the queen when I was greatly troubled by writing on the wall. Who am I?

It is greater than God and more evil than the devil. The poor have it, the rich need it and if you eat it you’ll die. What is it?

Answer: Nothing. Nothing is greater than God, nothing is eviler than the devil, the poor have nothing, the rich need nothing, and if you eat nothing you will die.

Riddles In The Bible

To understand a proverb and an enigma,
The words of the wise and their riddles. – Proverbs 1:6

Did you know that there are riddles within the Bible itself? It’s true! The most famous Bible riddle comes from the mighty Samson. He didn’t just enjoy having long locks of hair, but he also enjoyed a good riddle. He messed with the Philistines with this one…

It’s a tough one! Because it has to do with something Samson has experienced. The Philistines couldn’t figure it out so they made Samson’s wife tell them. And I love Samson’s response. I just think it’s hilarious. For more Funny Bible Verses Click Here.

Before sunset on the seventh day the men of the town said to him, “What is sweeter than honey? What is stronger than a lion?” Samson said to them, “If you had not plowed with my heifer, you would not have solved my riddle.” – Judges 14:18

But Samson wasn’t the only one who used riddles. We see riddles used throughout Proverbs, in Ezekiel, and Jesus himself used them!

I hope you have enjoyed these brain teasing Bible riddles! Feel free to leave me a comment below! I would love to hear from you.