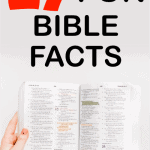 In this article we will take a look at 27 Fun facts about the Bible. Great for adults, youth, and kids to learn about the most sold book in the world. So, let’s learn some neat facts…

It’s well know that out of all the books of the world, the Bible ranks number 1 in sales (168,000 Bibles are sold in the US every day). It’s pretty epic! And for good reason. God’s Word is amazing and powerful. It is a beacon of truth in this dark world.

So, I thought it would be fun to look at some Bible facts. We will look at some fun facts, interesting face, and even some shocking facts all about the His Word.

And if you would like to grow more in the Bible. Check out my faith page where I cover all kinds of topics like, Angels in the Bible, Biblical Numerology, and Growing in Your Friendship With Jesus. And if you are big fan of facts check out: Scientific Facts In the Bible

10 Fun Facts about the Bible

The book of Esther is the only book in the Bible that never mentions God’s name. All other books in scripture mention God.

For God has not given us a spirit of fear, but of power and of love and of a sound mind. – 2 Timothy 1:7

There is a total of 365 verses that tell us to fear not! One for every single day of the year! Take that devil!

The original Bible wasn’t just written in Hebrew but also in Greek and Aramaic. The latter two are in the New Testament.

Bible Fact #5: Where was the Bible written?

With 40 authors the Bible has been written in 3 continents!

When you head to a book store, you will see all kinds of non-religious “bibles.” Like this BBQ Bible…

Did you know the Bible never mentions there being only 3 Wisemen who went to see baby Jesus?! There could be way more than just 3. Scripture doesn’t tell us how many went only that 3 gifts were given.

Check out more cool facts about the Wisemen.

The very last word in the Bible is Amen in the book of Revelation. Amen means “so be it” .

I remember reading the story for the first time and my jaw dropped when I read that there was 7 pairs of every clean animal in the ark and 2 of every unclean animal.

Oh, snap…all those storybooks have been telling only half the truth.

As of 2019, the full Bible has been translated into 698 different languages and just the New Testament into 1,548 languages! YAY!

8 Fun Questions Answered About the Bible

When were verses added to the Bible?

Chapters and verses were added to the Bible for convenience. Our modern Old Testament verses were done by the Ben Asher family around 900 AD. And our modern verses for the New Testament were created by Robert Stephanus. He divided the Greek text into verses in 1551.

What is the longest chapter in the Bible?

What is the shortest chapter in the Bible?

Which verse is at the exact center of the Bible?

It is better to trust in the Lord

What is the longest book in the Bible?

The book with the most chapters is the book Psalms. Per word the Book in Jeremiah wins in it’s original language of Hebrew. Having over 42,000 words.

What is the shortest book in the Bible?

3rd John with a total of 219 words. In the Old Testament the shorted book is the book of Obadiah with a whopping 440 words.

What is the shortest verse in the Bible?

What is the longest verse in the Bible?

“The king’s scribes were summoned at that time, in the third month, which is the month of Sivan, on the twenty-third day. And an edict was written, according to all that Mordecai commanded concerning the Jews, to the satraps and the governors and the officials of the provinces from India to Ethiopia, 127 provinces, to each province in its own script and to each people in its own language, and also to the Jews in their script and their language.” – Esther 8:9 NKJV

What is the longest word in the Bible?

Mahershalalhashbaz (Isaiah 8:3). I dare you to say that 3 times in a row…

Alright, are you ready for some shocking Bible facts?! We will take a look at 3 of them. They are pretty interesting!

Wait…What?! What is the wicked Bible?

This became known as the wicked Bible. And a year later the printers were fined for their error and had their printing license removed. It is said there are only 9 of these Bibles left since most of them were removed from circulation.

2. Thou Shall Not Steal

Like I mentioned at the start of this post…the Bible is the number 1 seller of books, estimated at 100 million Bibles sold yearly. But it’s also the number 1 book stolen.

This is mainly because Bibles are found everywhere in churches and in hotel rooms.

After 13 years (1998-2011) of hard work calligrapher Donald Jackson finished the St. John’s a Bible. A modern take on a fully handwritten and hand-illustrated Bible.

“The Bible, to be bound in seven volumes, contains 1,150 pages, weighs 165 pounds and measures two-feet tall by three-feet wide when opened. And every single one of its nearly 775,000 words was painstakingly written by hand by a team of scribes using 130-year-old Chinese ink dispensed through writing quills made of goose, turkey and swan feathers.”

And get this…it cost St. John’s University and St. John’s Abbey an estimated $8 million dollars to create! You can grab yourself a copy for the small amount of $140,000.

Here is a little video of the pages in Gospels and Acts. The artistry is beautiful.

I hope you have enjoyed all these fun facts about the Bible and have learned some interesting things! Feel free to drop me a comment below. I would love to know what God is teaching you. And don’t forget to check out Scientific Facts of the Bible.

Thanks for the fun read!

Fact check: The Bible was originally written in Hebrew, Greek, and "ARAMAIC" (your post says "Arabic").

Thanks for catching the mistake! Fact Check: Correct!

I appriciate a lot.

Actually i enjoy the whole stuff. And I really thanks for the fun facts and new knowlenge that I learn this day.And lastly i was currently writting a 8 fundamentals for my church and i will add this fun facts and some idea.