In this article, we will explore some powerful life lessons from the women at Jesus’ tomb. So, grab your Bible and let’s dig in…

When Jesus rose from the dead, those who went to His tomb found it empty. Can you imagine what thoughts were running through their heads?

These were the women who ministered alongside Jesus. They rushed to His tomb with spices to anoint His body.

“On the first day of the week, very early in the morning, the women took the spices they had prepared and went to the tomb” – Luke 24:1

But have you ever stopped and thought about what lessons we can learn from this powerful story in the Bible? The women who made it to Jesus’ tomb have some incredible things to teach us about faith and dedication to our Lord Jesus Christ.

They include Mary Magdalene, Mary the mother of James, Salome, Joanna, and others (Mark 16:1, Luke 24:10). These women stood by Jesus even after His death and resurrection.

Who Were the Women at the Tomb?

Many historical images only depict 2 or 3 women at the tomb, but if you study the gospels, you will realize there was actually 6. Here are the leading ladies…

According to Luke 8:2, and Mark 16:9, Mary was delivered of seven demons and become a devote follower of Jesus. According to Mark 16, she was the first person to see Jesus alive!

She was a devoted follower of Jesus and helped support His ministry. Her husband Chuza was a steward of King Herod Antipas. (Luke 8:3).

Out of all the women at the tomb, this Mary is probably the most well known. She is the one who gave birth to our wonderful Savior. Which, if you break it down, she was a witness to the birth, life, death, and resurrection of the Messiah!

4. Mary – Mother of James the Younger and Joseph

This can be super confusing since this Mary also has children named the same as Mary, the mother of Jesus! This was super common for families to repeat family names like this. Other nationalities had this tendency. Therefore, in scripture you see them mention their husband’s name or where they were born.

Mary was a disciple and witnessed the crucifixion, burial, and resurrection of Jesus.

The Greek historian Eusebius stated Clopas was the brother of Joseph of Nazareth. If this is the case, then Mary and Clopas were the aunt and uncle of Jesus. This then would make Simeon her son, the cousin of Jesus.

She probably followed Jesus’ ministry early on and became a follower. She witnessed the certification and resurrection.

6. Salome – The mother of James and John

Salome was a follower of Jesus and also witnessed the crucifixion and resurrection. It is said she was the mother of the apostles, James and John (the sons of Zebedee).

What Can We Learn From the Women at Jesus’ Tomb 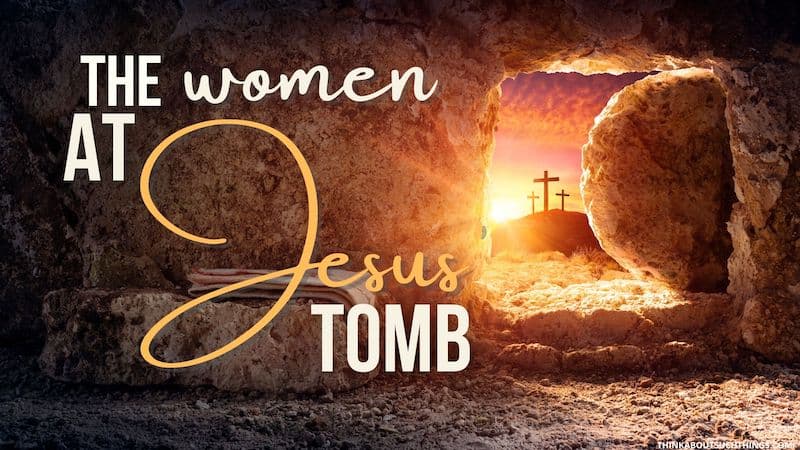 These women loved Jesus, and that is why they were the first ones at His tomb. Mary Magdalene went to the tomb while it was still dark (John 20:1). She was among the ones who went with the intention of anointing Jesus’ body with spices. She was also present when Jesus was crucified on the cross (John 19:25).

The women grieved when Jesus died but when they saw Him after His resurrection, they were filled with joy. Mary Magdalene and the other women teach us to love deeply and under all circumstances.

She did not abandon Jesus when He was crucified or even when He died. She was still committed to Him because of her love for Him.

We can learn a lot from this level of love and dedication. That even when circumstances try to shake our faith we our steady.

To piggyback on love, these women had faith which led them to be faithful. When Jesus travelled from town to town, these women followed Him and were faithful until the time He left the earth.

They supported His ministry through their own means to make sure that every town heard about the gospel.

After this, Jesus traveled about from one town and village to another, proclaiming the good news of the kingdom of God. The Twelve were with him, and also some women who had been cured of evil spirits and diseases: Mary (called Magdalene) from whom seven demons had come out; Joanna the wife of Chuza, the manager of Herod’s household; Susanna; and many others. These women were helping to support them out of their own means. Luke 8:1-3

For them to have followed Jesus wherever He went, they were faithful to Him and believed in Him and the work He came to do on earth.

Like these women, we are to be faithful to Jesus and tell others around the world about Him. We ought to give ourselves to the work of the gospel until the day we leave this earth.

As faithful servants of God, we can give of ourselves to living for the Lord. 2 Corinthians 5:15 tells us that Christ died for us, that we should no longer live for ourselves but for Him.

When Mary Magdalene was crying at Jesus’ tomb, He appeared to her, and she was overjoyed. She went and told the other disciples that she had seen the risen Jesus. – John 20:18

For Jesus to appear to her at the tomb means she had a close relationship with Him because of being part of His ministry. He had delivered her of seven demons before His crucifixion (Luke 8:2).

Jesus longs to have an intimate relationship with each of us. He died for us so that through Him, we would be reconciled to God and have fellowship with Him every day.

To have an intimate relationship with God, we have to spend time with Him daily and get into His Word. This is sometimes hard during our busy days, but if we truly want to grow in our relationship we need to make it priority.

>>Check Out 9 Ways To Make Time For God

4. They Gave of their Resources for the Work of Ministry

The women who were at Jesus’ tomb used their own personal resources. They understood that those who travelled with Jesus needed food, shelter, among other things. They gave from the resources they had and ensured that everyone was comfortable.

When they went to the tomb, they had prepared spices and ointments for Jesus’ body. If you read in John 19, you would have seen that Nicodemus has already used 75 pounds of myrrh and aloe. Yet they still went to give their share. This is a beautiful picture of giving, sacrifice, and devotion.

In the same way, we can give our resources and time for the Lord. Many ministries give to the poor, send missionaries to other countries, build churches and schools, and they need finances for that. But even beyond finical giving…God wants us to give of ourselves. When they prepared those spices, they didn’t hire someone to go anoint Jesus for them. They went, knowing that it would a hard task emotionally.

Sometimes, the greatest resource we can give is ourselves. Our time, energy, emotion, and strength.

We can give as the Lord has blessed us. 2 Corinthians 9:7 tells us that God loves a cheerful giver, and we can give wholeheartedly to the work that ministers are doing on earth to spread the gospel.

When God blesses us, He gives us an abundance so that we can bless others with the extra that we have. The women who followed Jesus were glad to support his work and we should have the same gladness of heart as we give in all ways.

These women were loyal to Jesus and were always at His side. Even at the very end when they were going to anoint His body.

You can imagine the challenges that Jesus faced as He moved from town to town. Some people insulted Him while others chased Him away. Through all these, the women with Him never walked away.

Even when many of His disciples walked away, those closest to Him did not. The women and His twelve disciples remained until the end.

We can also be loyal to Jesus today despite the circumstances we face today. Tough situations come, loved ones pass on, people we know walk away from the faith, etc.

Our relationship with Jesus should not be affected by the circumstances we face or those who have left the faith. We should continue to be loyal to Jesus no matter what we face in life.

When we are loyal to Jesus, we can grow in our faith in Him and be His witnesses on earth of the wonderful things He has done for us.

The women at Jesus tomb teach us that we can hold on to Jesus for life because He gave His life for us. They believed in what Jesus was doing and the good news He brought to earth. We can have the same dedication they had for Jesus.

Our faith in Jesus should stand the test of time even when we are persecuted because of Him. Mary Magdalene and the other women who followed Jesus shared the gospel with others because they had tasted firsthand the miracles of Jesus. As we experience Jesus in a special way, we are to tell others about our experience with Him so that they may know Him.