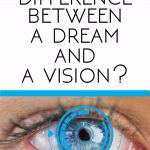 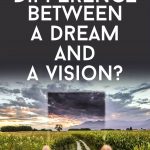 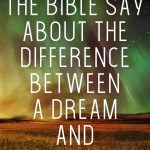 In this article we will answer the question, is there a biblical difference between dreams and visions? The Bible speaks on these topics in depth. We will see how a dream comes in the night season or sleep and visions take place while awake. So, let’s grab our Bibles and find out more…

In Biblical days when a man/woman was gifted to receive dreams and visions, it was a sign that they were a prophet (Numbers12:6) This is why we see that 1/3 of the Bible consists of prophetic revelation.

It’s safe to say that God likes speaking this way to His people.

I know for me personally dreams and visions have been a big part of my Christian walk. I believe learning and growing in your prophetic gift is important. We do that by digging into the Word, having a healthy theological understanding, and accountability with other mature believers.

We will take a look at the Hebrew and Greek to get a better understanding of these prophetic revelations. The one thing we need to keep in mind is that revelation from God can come in many forms.

Even the type of dreams you can have can be vivid, lucid, long or short…etc Same goes for visions and we will take a deeper look at that below.

What is a dream?

In a dream, in a vision of the night, when deep sleep falls on people as they slumber in their beds, he may speak in their ears and terrify them with warnings, to turn them from wrongdoing and keep them from pride, to preserve them from the pit, their lives from perishing by the sword.

There are many Bible verses on the topic of dreams. Which can help further your understanding of what dreams are and how God speaks in dreams.

There are different variations of the Hebrew word for dream but Chalam is the root word.

DREAM – CHALAM חָלַם  khaw-lam’; a primitive root; properly, to bind firmly, i.e. (by implication) to be (causatively to make) plump; also (through the figurative sense of dumbness) to dream:—(cause to) dream(-er), be in good liking, recover.

There is a debate among Jewish scholars what Chalam all entails. But when we look at the context of the word used we can see it implicates a revelation while sleeping. Job 33:15-18

It’s important to note that NOT all dreams come from God. But God can speak to us through dreams. We must be careful in our pursuit of interpretation and understanding of them.

Now, if we check out the Greek we see it shown in two different words:

In the popular prophetic verse of Acts 2:17…

And it shall come to pass in the last days, saith God, I will pour out of my Spirit upon all flesh: and your sons and your daughters shall prophesy, and your young men shall see visions, and your old men shall dream dreams...

This is where we see the word dream used differently. I have been in ministry for the past 15 years but I’m not a Greek scholar so I can’t give you an in-depth understanding of why there are two different words used.

But what we can gather about dreams in both the Old Testament and New Testament is this:

Dreams are images or visions that come while in a state of sleep. They can be divinely inspired by God, or the enemy or ourselves.

What Does Bible Say About Visions?

Now, what about visions?

Most people understand what dreams are, but visions can still seem like a mystery. But they don’t have to be. The Bible makes it clear what they are.

The word vision is translated a few different ways in the Hebrew. Some go into meaning oracle, seer, dream, etc…

For example, Chazon is a noun used 35 times in the Old Testament and comes from the root “chazah,” which can be translated “see” or to “receive by revelation.”

If you are studying particular passage with the word I encourage you to look it up in see what it is.

For this post we will look at the two most popular or root uses.

חָזָה châzâh, khaw-zaw’; a primitive root; to gaze at; mentally to perceive, contemplate (with pleasure); specifically, to have a vision of:—behold, look, prophesy, provide, see.

Then in the Greek we get a similar understanding

A vision is a spiritual revelation coming to an individual while awake. This revelation can come in the form of an open vision or a mental vision.

In Samuel 3:1 we see that visions are related to Word of the Lord. Visions are prophetic in nature. They reveal the plans and purposes of God.

The boy Samuel ministered before the LORD under Eli. In those days the word of the LORD was rare; there were not many visions (Chazon).

They can also be show or better to say reveal what is happening in the spirit realm. The greater reality!

And Elisha prayed, “Open his eyes, Lord, so that he may see.” Then the Lord opened the servant’s eyes, and he looked and saw the hills full of horses and chariots of fire all around Elisha.

We can perceive visions in two ways. One is in an open vision and other is a vision of the mind.

The best way to describe an open vision is that it’s a vision seen with your eyes wide open. It can be like a screen opens before you and you watch what is happening or even taken up (Daniel 8)

These types of visions are extremely VIVID and for me personally, you don’t forget them. I have experienced both a screen like open vision while in group prayer time and the spiritual realm being opened up to me.

They shook me to the core.

Visions of the Mind

This type of vision is the hardest to discern. Our imagination can get in the way of truly hearing or should I say seeing what God is wanting.

But God can speak to us with images in our mind. We can get a quick glimpse of something in our head and then it quickly passes by or sometimes it sticks around or is vivid.

When Paul was blind he has a vision of Ananias coming and praying for him. (Acts 9:12 Vision – horama)

I was working in a ministry school as a leader. My best friend was in the 2nd year of the program. I had noticed when we would hang out I would constantly see in my mind an earthquake. I would see this patch of dry ground shake and break apart.

I kept seeing it all the time when I was around her. I didn’t know what to do with it. I just kept ignoring it. It was about two weeks into seeing this that I kindly turned to my best friend and said…

“Are you feeling like everything is being shaken in your life and you’re feeling vulnerable? Kind of like an earthquake.”

She instantly broke down into tears and said, “Yes!” I then prayed for her and encouraged her in the Lord. God knows what she is going through and wanted her to know He was there and will help! Praise God!!

That was a mental vision I was having. It was me discerning her situation and being able to minister to her.

*Important note. I was able to minister to her at this level because of our relationship. I most likely would have not shared what I was sensing with a stranger or someone I don’t know well. What I would have done is asked if I could pray for the person or pray for them in my one on one time.

What About Visions of the Night?

Scripture mentions visions of the night 26 times in the KJV. I have read a lot on this and really there is not a clear answer to what truly is a vision of the night.

It basically falls into one of these 3 categories:

The Gift of Seeing

I hope by this part you have a clearer understanding of what is the difference between dreams and visions. I also hope it has encouraged you to grow in your understanding of God’s word and the gift of prophecy.

Some people see a lot in the spirit realm. I remember that before I got saved I had a slew of dreams and even vision type stuff. At the time I didn’t realize what they were. I honestly thought everyone experienced. them.

When I came to Lord and I had a big wake up call (you can read my testimony here) and that when I realized I had a prophetic gift specifically in seeing or as some would like to call it, being a seer.

I want to encourage you that if you tend to have lots of dreams or see things like visions get into the Word. Ground yourself heavily in the Bible. Get around other mature Christians who can help you in your development in your seer gift.

Try to find a church that will help you:

The gift of prophecy is a gift to SERVE. It’s for the edification and exhortation, and comfort of the body of Christ. 1 Corinthians 14:3

I hope this was helpful in learning the difference between dreams and visions. And that it has stirred up your faith to want to know more.

If you would like to read more about the topic of dreams and the prophetic then check out my posts below.

WHAT IS DIFFERNCE BETWEEN SEER GIFT AND PROFIT AND HAVING THE SONS OF ISSACHAAR GIFT?

Hey .would like someone to help me.i have had some dreams lately an don't understand

Over many years I have had open and closed visions. I can describe in specific detail colors, forms, and shapes of visions. Never knew what they meant until reading this. I even have a picture kept on my phone.

This has helped me understand what God has given me.....so very blessed 🙏

I really understand many things here May God keep you sir and empower you more with his grace thank you sir What a wonderful teaching.

Hey Melissa, this was really helpful information for me. I used to have crazy dreams, and when I was a young kid the dreams and visions came true. Scared me so much I ran ( well I tried) from it. Nobody told me what was going on or what it was even though I grew up in the church. This was helpful information I apprecaite the post and the example. Thanks for writing.