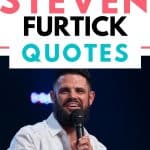 A selection of motivational Steven Furtick quotes. They will build up and encourage your faith.

I have a good quote selection of classic ministers that have impacted Christians for generation. And I have slowly been adding some more modern ministers of our generation.

So, I wanted to bring Steven Furtick to my Christian quote collection. He’s been a voice in the generation and has a lot of powerful statements. Especially from his preaching and books!

But like I do with all my quotes. I like to add a short little bio or more like an intro. Just in case the reader is not familiar with the author of these quotes. I hope it’s helpful!

A Short Bio on Steven Furtick

Steven was born in 1980 in South Carolina. It was at the age 16 that he felt a call to pastor. And at the age of 22 (2002) he married his now wife Holly and now the father of 2 sons and a daughter. He is the author of 7 books and has written numerous songs. Here is a snippet from his website:

“Steven Furtick is a pastor, songwriter, & New York Times best-selling author. As founder and lead pastor, he has helped grow the multi-site Elevation Church into a global ministry through online streaming, television, and the music of Elevation Worship. He holds a master of divinity degree from Southern Theological Seminary…” (Read More)

You do the natural. Trust God for the super. — Steven Furtick

The reason we struggle with insecurity is because we compare our behind-the-scenes with everyone else’s highlight reel. — Steven Furtick

The minute I start being afraid of what people might say is the minute I become useless to God. — Steven Furtick

One of the Enemy’s most effective strategies is to get you to focus on what you don’t have, what you used to have, or what someone else has that you wish you had. He does this to keep you from looking around and asking, “God, what can You do through what I have? — Steven Furtick

Prayer is the arena where our faith meets God’s abilities. — Steven Furtick

Our aim should be pointing others to Christ, not impressing them with our Christ likeness. — Steven Furtick

You can’t fulfill your calling in your comfort zone! — Steven Furtick

God guarantees that His Word will not return void. He doesn’t guarantee that the return will be immediate. Keep sowing! — Steven Furtick

It shouldn’t freak you out to realize that God’s eyes are on you. Because He doesn’t see you through eyes of disapproval or disappointment. His presence is not a sign of condemnation. It’s actually an invitation. God is present with you, through His Holy Spirit, because He intends to uproot you from the tyranny of the familiar, shatter the monotonous life you’ve had. And take you on an adventure. — Steven Furtick

When you know the builder, you can have complete confidence in the quality of his work. — Steven Furtick

Just because you’re not visible doesn’t mean you’re not valuable. You can be left out by others but set apart by God for His special purpose. — Steven Furtick

What matters most is not what I think I am or am not. What matters is what my Father sees in me and what He says about me. — Steven Furtick

I have nothing to prove, because I am already approved. — Steven Furtick

Don’t fear opposition. Expect it. And use it as an opportunity to fuel your growth. — Steven Furtick

I don’t believe God’s called me to survive the world but to change it for His glory. — Steven Furtick

Would have. Could have. Should have. This is the language of condemnation underscored by the passivity of regret. It’s a dead language. The thing is, you can’t un-sin. You can only repent. — Steven Furtick

Even if you mess up, God’s disappointment with your sin will never be greater than His love for you. — Steven Furtick

From your perspective, failing makes you a failure. But from God’s perspective, your dream may have to die for His plan to come to life. — Steven Furtick

Most of us overestimate how much control we have & underestimate how much choice we have. The truth is, you never really have control, but you always have a choice. Make the choice today to stay submitted & give your control to God. He can handle things much better than you can. — Steven Furtick

God’s Word is perfect and powerful, but if we don’t make it personal, it will not change our lives. — Steven Furtick

There you have it! 27 quotes by Steven Furtick that will motivate and inspire your walk with God! I hope you have enjoyed them! For more Christian quotes please check out these below:

Feel free to drop me a comment below! I would love to hear from you and know what the Lord is doing in your life.